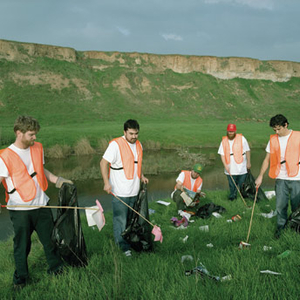 Grandaddy are an American indie pop band formed in Modesto, California in 1992 by singer/guitarist/keyboardist Jason Lytle, bassist Kevin Garcia, and drummer Aaron Burtch; although a noisy, lo-fi approach characterized early recordings like 1994's Complex Party Come Along Theories, with the 1995 additions of guitarist Jim Fairchild and keyboardist Tim Dryden the group's sound expanded exponentially over the course of subsequent efforts including the unreleased Don't Sock the Tryer and the 1996 EP A Pretty Mess By This One Band.

Originally issued on indie label Will Records, 1997's acclaimed full-length Under The Western Freeway proved Grandaddy's creative breakthrough, and the following year the album was reissued on major-label V2, with "Summer Here Kids" earning Single of the Week honors in the pages of the NME. The Broken Down Comforter Collection, a compilation of singles tracks, preceded the 1999 Signal To Snow Ratio EP, which heralded a movement toward the vintage electronic textures further in evidence on 2000's superb The Sophtware Slump. In 2002, the group released another odds-n-sods collection, Concrete Dunes, which paved the way for a busy 2003: that spring, Grandaddy released the Floating Debris EP and their fourth full-length, Sumday, and spent the rest of the year touring, making appearances at festivals such as Glastonbury. In 2005, they resurfaced with the Excerpts From The Diary Of Todd Zilla EP and a full-length album (Just Like The Fambly Cat) followed in 2006. It was to be their last, though Jason Lytle continues to tour, playing Grandaddy songs as well as his own solo works.

Under the name Arm of Roger, Grandaddy recorded a joke album entitled The Ham and its Lily in 2002.

A.M. 180, which was released as a single, is featured prominently in the British film 28 Days Later.

On the 27th January 2006, Jason Lytle confirmed that the band would split following the release of their final album, Just Like The Fambly Cat.

Jason Lytle has since toured the US as a solo artist, playing Grandaddy songs from the last album and others. He is said to plan a solo career of new material.

On March 2, 2012, Grandaddy announced their reunion with news of a headline slot at the End of the Road Festival in Dorset, England on 2 September. Further dates are expected.

The Sophtware Slump ..... On A Wooden Piano

Excerpts From The Diary Of Todd Zilla (EP)

The Broken Down Comforter Collection