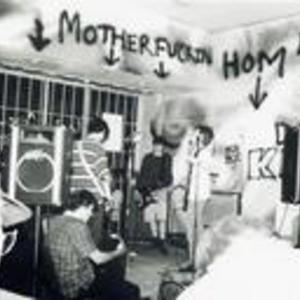 There are two bands who have used this name. 1) A progressive rock band from Devon, UK. 2) An experimental pop band from Tampa, USA. 1) London based band, formed in 1970 as a four-piece band. Initially building a large following in Holland and Germany, Home's largest British gig was a Wembley concert supporting Led Zeppelin. The band released 3 albums; Pause For A Hoarse Horse (1971), HOME (1972) and The Alchemist (1973)

1) London based band, formed in 1970 as a four-piece band. Initially building a large following in Holland and Germany, Home's largest British gig was a Wembley concert supporting Led Zeppelin.
The band released 3 albums; Pause For A Hoarse Horse (1971), HOME (1972) and The Alchemist (1973)
After the release of the third Album they added vocalist Dave Skillin and keyboard player Jim Anderson to the line-up. The band split in 1974 and Wisefield went on to join Wishbone Ash.

2) The experimental pop band Home formed in Tampa, Florida, in the early 1990s before relocating to New York in 1996. The band released eight self-produced, sequentially-numbered, ultra-low-distribution albums on cheap Radio Shack cassettes before signing to Sony's Relativity Records label, which distributed its ninth album (appropriately titled IX) in 1995. This album, Home's only release on a major label, received favorable reviews in publications such as Spin, The Village Voice and Magnet. Subsequent Home albums have appeared on independent record labels, also to generally positive reviews. Dave Fridmann of Mercury Rev was the producer behind at least two of Home's albums.

Though Home was originally regarded as a lo-fi band due to its primitive recording techniques, its releases starting with IX have largely featured a cleaner sound highlighted by guitars and various electronic keyboards. In reviewing IX, The Village Voice observed that Home's sound resembles bands from "the late '80s (Sebadoh, Grifters) and mid-70s (Devo, Faust, David Bowie) sprinkled with enough influences out of the bargain-bins (Elton John, Gong) to push the hipster taste-envelope a smidgen closer to both prog-art and schmaltz-rock." That album received a 7-out-of-10 rating from Spin. A year later, describing the band's independent album Elf: Gulf Bore Waltz, The Chicago Tribune wrote: "Laboring in the rock 'n' roll hinterland of Florida, the band Home has developed a refreshingly scattershot sound that wanders erratically through folky balladry, prog rock, ragged pop, and unclassifiable experimentation. Though somewhat reminiscent of indie rock obscurantists like Pavement, Home is both more ambitious and more consistently tuneful than many of its trendier peers."

Less charitably, The Trouser Press Record Guide opined: "When intently focused, Home can squeeze an agreeably synthetic, Devo-esque poptone (like 'Make It Right') from its gizmos. More often, though, Home lapses into wildly freeform freakouts (like 'Atomique') that combine electronic noise, found sound and even a bit of spoken word. ... Those endowed with short attention spans will no doubt have the easiest time making it all the way through IX."

Home's 16th album, Sexteen, which the band describes as "a concept record about fucking," was released in 2006. This album also marked the end of the band's longstanding relationship with its European label, Cooking Vinyl. During the same year, members of Home performed under the name Home Hunters during the Come The Freak On music festival at Bombshell Gallery in St. Petersburg, Florida.

As of late 2006, Home was making preparations for its next album, Seventeen, envisioned as the soundtrack to a movie that the band members were simultaneously preparing to film.

Pause For A Hoarse Horse (Remastered 2011)

Pause For A Hoarse Horse (Vinyl)