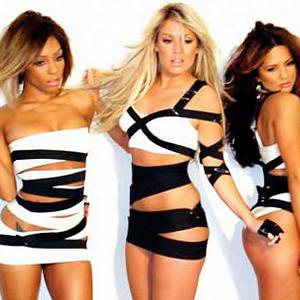 Girlicious is an American pop girl group solely featuring Nichole Cordova, who strangely enough have only released their music in Canada. Former band member Tiffanie Anderson left the group sometime after their first album release, and Chrystina Sayers and Natalie Mejia leaving after their second. They have released a total of 2 albums. Girlicious' current plans are to find two new members to join Cordova.

Their self-titled album was released in Canada during 2008, reaching number 2 on the Canadian Albums Chart, and later repackaged as a Deluxe Edition in December 2008.

Now a trio, the group released the single "Over You" on December 25, 2009 in Canada, which charted on the Canadian Hot 100 at 52, and lasted on the chart for eleven weeks.

On March 23, 2010, they released the single "Maniac" in Canada, which only impacted the Canadian charts at 74, but was MTV Brazil's #1 music video of 2010, and climbed the Serbian charts to 11 and lasted on the chart for eleven weeks. The girls also filmed a music video to accompany the single's release.

Next was their single "Drank", released on July 21st 2010, for the soundtrack to MTV's hit show Jersey Shore.

On November 22, 2010, Girlicious would finally release their sophomore album "Rebuilt", which unfortunately only peaked at 86 on the Canadian Albums Chart, a significant drop compared to their first release. This can be explained by the extremely poor promotion "Rebuilt" got with the new label Universal Music Canada compared to the promotion the girls got with their previous label.

Formed by Robin Antin from the reality TV show "Pussycat Dolls Present: Girlicious". Before the airing of the series premiere of the show, the girls were already chosen for "Girlicious" and had started recording their debut album in late 2007. Originally the group was to be a trio, but was conceived as a quartet through a final decision of creator Robin Antin on the show's season finale. Thus far, they have received greater attention from Canadian audiences. Girlicious was nominated for "Breakout Group", and "Reality: Music Competition" 08. They have modeled for "Sexy Hair" and they were in the October issue of the magazine from one of their photo shoots. The have also been featured in Danny Fernandes's video for his single Fantasy.

Girlicious was originally signed to Geffen Records. However as of early 2009, they are currently signed to Interscope Records.

Beginning in early June, 2009, rumors spread regarding Tiffanie Anderson's place in Girlicious, and whether she was still a part of the group. Speculations of Anderson's departure were sparked primarily by Girlicious' MySpace account, when all photos of Anderson were completely removed from the site, along with the heading title of their MySpace page (which previously read "Nic, Nat, Tiff and Chrys, that's who the hell we are"), changed to ?Nic, Nat, and Chrys, that's who the hell we are", removing Tiffanie's alias from the quote altogether. Further sparking rumors of Anderson's displacement from Girlicious was a Twitter update from Robin Antin, which read: "Girlicious fans! Nic, Nat & Chrys r getting ready to record a new single, new video, & tour the world! We LOVE YOU 4 LOVING GIRLICIOUS!"

It was officially confirmed on June 11, 2009, via a YouTube video upload from Anderson's official YouTube channel, that she was no longer a member of Girlicious. In the video, Anderson cites changes with their new record label and sound, stating: "Robin Antin and the label were looking for a new direction for the group" ... "they were looking for the group to not be [urban] any longer". She also speaks of personal differences between some of the girls, saying the group wasn't seeing eye-to-eye on a lot of things: "a couple of the girls and I didn't have the same values or the same morals - causing a huge conflict in the end of it all."

On Sunday, June 21, 2009 Girlicious appeared live at the 2009 MuchMusic Video Awards in Toronto, Canada as nominees and presenters. The girls won the award for the "Most Watched Video" for Like Me beating other artist such as Lady Gaga and Lil Wayne. Their video for Stupid Shit came in at second place. Robin Antin officially confirmed during a press conference for the MuchMusic Video Awards that Anderson was no longer part of the group.