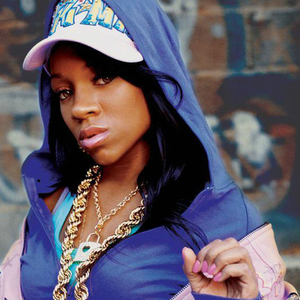 In 2006 she signed a recording contract with Jive Records. Lil Mama worked with producers such as Cool & Dre, Scott Storch, The Runners, Groove Chambersand Dr. Luke. In June 2007 she released her first single Lip Gloss. The single, which was produced by Groove Chambers, was her breakout hit. It peaked at 10 on U.S. Billboard Hot 100 and was nominated Monster Single of the Year at the 2007 MTV Video Music Awards. This song was #56 on Rolling Stone's list of the 100 Best Songs of 2007.

Her second single G-Slide (Tour Bus) was released in September that same year but failed to match Lip Gloss's success failing to chart in the U.S. Billboard Hot 100. Though the single was a Top Ten hit peaking at #8 on the New Zealand RIANZ Singles Chart making it her first single to chart worldwide. The single was featured in the film How She Move.

In February 2008, she released her third single Shawty Get Loose with T-Pain and Chris Brown. The single saw her return to the U.S. Billboard Hot 100 in the top 10. The song was also used during promotion commercials for the sixth season of Dancing with the Stars.

Her debut album VYP (Voice of the Young People) was released via Jive Records April 29, 2008. A fourth official single What It Is (Strike a Pose) with T-Pain failed to chart. A Promo Single Truly In Love Featuring Peter Toh was released in 2009 coincided with a music video.

Lil Mama is currently a judge on America's Best Dance Crew on MTV. The series premiered on February 7, 2008 and has run for five seasons. She also participated in a group performance with the final four crews of Season 5 during the Illusion Challenge.

She came under fire in September 2009 when during the MTV Video Music Awards she jumped onstage and proceeded to interfere with Jay-Z and Alicia Keys' performance of Empire State of Mind to close the show, posing with Jay-Z and Alicia Keys at the end of the performance. Many in the industry and fans alike criticized her for her actions in the coming weeks after the shows fallout. She defended herself as being caught up in the emotion of the performance as she also is a New York native. Her career has spiraled downward ever since.

VYP Voice Of The Young People