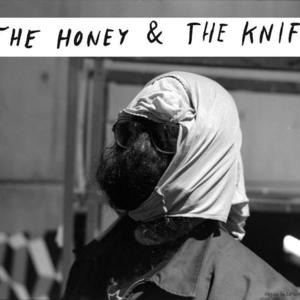 "...each one gets the honey and each one gets the knife, but fools like us always survive..." * A non-conforming magazine gave its music journalists a daunting task a couple of years ago, of having to sum up the new and upcoming records in just 1 single word. For Admiral Freebee's 'The Honey and the Knife' the word 'debut-vibe' would be quite the fitting candidate. It is the keyword of a mature, well-considered fourth album that is made with the candour of a first album. *

Tom Van Laere is a curious and driven artist who likes to challenge himself. ?Songs' (2005) was partly built on the excitement that goes with having to record an album with a group of strangers in a far-away city (Los Angeles) in just 7 days. For 'The Honey and the Knife' he found his motive and drive while walking. Are you familiar with The Walk Anyway Day? Translated rather freely as "keep walking, even if you don't feel like it or it doesn't matter". Van Laere left his guitar at home and composed the songs in his head while taking long walks across the city. He tested the new material, without introducing it first, in places where no one knew him. Where Amsterdam was his favourite spot to keep a low profile.
*
Admiral Freebee kept that 'feeling of a debut' as a result of it. A warm memory of the no man's land between the silver at Humo's Rock Rally 2000 and the release of 'Admiral Freebee' (2003). He follows his feelings and rekindles the bond with Jo Francken, the producer of the debut album. Many perils lay ahead. But he knows exactly what to do. "Nobody knows better what I can do than Jo. He has been my sound technician for ten years and the producer of the first album."
*
The two men recorded the basic tracks in just a few days in the Motormusic (Koningshooikt) studio. After that, they had the luxury of being able to forget time in Studio Dam (the home-studio of Francken), something Van Laere had never done before.*

'The Honey and the Knife' is the cross section of a) a debut album, b) ten years of evolution and c) life, as it passes. Without it being played out, you feel that it covers the deeper things in life. Freebee remains in obscurity who the storyteller is. "The title is a metaphor for contradicting oneself. 'The Honey' imagines that he knows himself. 'The Knife' imagines that he knows others." Contradictions reign the album. He/someone is always on the run ('Always on the Run') but looks for a place to settle down ('Home'). He/someone turns his back on his loved one ('The Last Song about You') but also paints the heavens with her name ('Fools Like Us').
*
The musical geography of Admiral Freebee remains unchanged. But his spectrum was never before this broad. Opener 'Blues for a Hypochondriac' is a sturdy fantasy about Grinderman. 'My Hippie Ain't Hip' is swinging danceblues that can brotherly be entwined with Primal Scream's 'Kill All Hippies'. 'The Last Song about You' shares some common genes with The Replacements and 'Always on the Run' travels between eighties' Bowie and Scissor Sisters. 'Hymns For Demons' starts off with the comfortable laziness of Lambchop and ends in a guitar fury. The silver lining comes from Karolien Van Ransbeeck, an Antwerp gem that sounds as though she knows where the elves live in the forest.
*
'The Honey and The Knife' is at times warm and at times angry, at times small and at times big, at times subdued and at times danceable. The best in a series? Never ask an artist to have to choose between his own children. But 'The Honey and The Knife' surely contains everything a good album needs to contain. Joni Mitchell recently said she misses the authenticity, integrity and honesty in today's music. They're all present here.
*
The photo's and artwork are by Ed Templeton. A Californian skater that has a number of world-famous 'tricks' attached to his persona. He is the mastermind behind the skateboard company Toy Machine (www.toymachine.com), but at the same time a blessed and respected photographer and painter. That combination has some implications. When he held an exhibition in Antwerp in 2007, twelve year old skaters were flocking in front of the doors coming from Paris and Rotterdam. Templeton will have an exhibition in the S.M.A.K. (Ghent), from April 3rd until June 13th.

A Duet For One

Wake Up And Dream

The Honey & The Knife