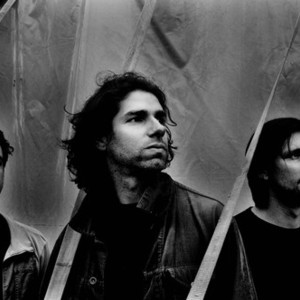 Yevgueni is a band from Antwerp in Belgium who perform their songs in Dutch. Their music is a poppy folk that is often described as modern 'kleinkunst'. The members are Klaas Delrue (vocals, acoustic guitar, harp), Geert Noppe (keyboards, vocals), Maarten van Mieghem (bass, acoustic guitar, vocals), Stef Vanstraelen (drums, percussion), and Patrick Steen Aerts (electric guitar, mandolin). The band is formed in 2002 and named after Evguenie Sokolov, an instrumental song by Serge Gainsbourg. The name and spelling were altered slightly to ensure proper pronunciation.

The band is formed in 2002 and named after Evguenie Sokolov, an instrumental song by Serge Gainsbourg. The name and spelling were altered slightly to ensure proper pronunciation.

The group performs a mix of chanson, cabaret and pop music. Their 2005 debut album, "Cannibal", was produced by Peter Obbels and Wouter Van Belle. At the time they were already a well-known live act, playing events such as The Gentse Feesten, Folk Dranouter and Marktrock Leuven. Their first single, 'Als Ze Lacht', topped Radio 1's Carte Blanche for ten weeks. This gave them an honorable mention on the Carte Blanche website. They have appeared twice at the Nekkanacht event in Antwerp: first as winners of a competition, the second time by request from popular Belgian folk band Kadril.

During their appearance on Belgian late night show De Laatste Show in early 2006, host Mark Uytterhoeven openly declared that he was a great fan of the band. He repeated his statement at their appearance on the magazine Humo's Pop Poll in the Antwerp Sportpaleis. In June 2006, they won the TV show "Zo is er maar ??n" with a cover version of Louis Neefs' "Laat ons een bloem".

Yevgueni's popularity in Belgium has brought about a new revival of cabaret music and themes of nostalgia with a touch of social commentary that can be subtle ("Mama ik wil Papa") or more blatant ("Wat Zal Het Zijn").