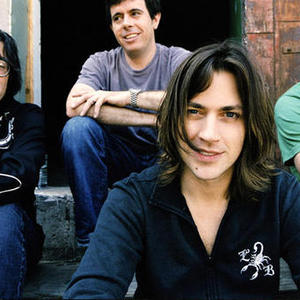 Old 97's are an alt-country band originally based in Dallas, Texas, USA. The group formed in 1993 and took their name from a song popularized by Johnny Cash, "Wreck of the Old '97". They describe themselves as a rock band with influences as varied as The Kinks, The Beatles, Pixies, David Bowie, X, and Merle Haggard. The band often performs songs made famous by the latter two musicians, and has interspersed a number of these on their eight releases since 1994.

Old 97's have been heralded as a great live band. They included five live songs as a bonus disc on Satellite Rides, and released a live double CD set recorded at historic Gruene Hall in 2005, Alive and Wired. Singer/guitarist Rhett Miller has released three solo albums and singer/bassist Murry Hammond released his first solo effort in April 2008. Ken Bethea plays lead guitar for the band and playing the drums/singing is Philip Peeples.

For photographs and additional information see the official website, www.Old97s.com.

They Made A Monster: The Noise Trade (EP)