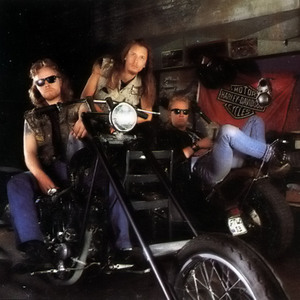 There are at least 3 bands called Backsliders. One is from Australia (see http://www.backsliders.com.au) and the other, from Finland, is described below. The third is an alternative country rock band from Raleigh, North Carolina. Finnish biker band Backsliders were Marko Asser Hirsma (vocals & bass), Dan "Danny" Peter Wilhelm Eklund (guitar), Antti Kalervo "Ana" Haglund (drums) and Olli Sakari Hilden (except on the first two albums where they were a trio) (guitar). On the latest album Marko Kainulainen (played with Andy McCoy and Boycott) replaced Antti Haglund who passed away.

Finnish biker band Backsliders were Marko Asser Hirsma (vocals & bass), Dan "Danny" Peter Wilhelm Eklund (guitar), Antti Kalervo "Ana" Haglund (drums) and Olli Sakari Hilden (except on the first two albums where they were a trio) (guitar). On the latest album Marko Kainulainen (played with Andy McCoy and Boycott) replaced Antti Haglund who passed away. Olli "?-lli" Hilden is cousin of better known finnish hard rocker Michael Monroe and played bass in his first band (originally Black Magic named after Black Sabbath changed it to Hoople after Mott The Hoople), which also included Michael's brother on drums (year was 1971 and Michael 9 years old). He also plays on some Michaels latter solo stuff. In 1990 most legendary finnish guitarist Albert (aka Pekka Johannes) J?rvinen (ex-Hurriganes) joined the band and they recorded one album that consists of Hurriganes covers under name Flashbacksliders. J?rvinen died in 1991 for abuse of alcohol etc. In 1993 ?-lli joined Pelle Miljoona when short time guitarist Markku "Crazy" Heiskanen went back to his ex-band Havana Black. ?-lli plays on Pelle's albums Ok! and Juuret (Roots). Hirsma was shot dead in a parking lot in autumn 2001.

Band had very hard reputation early on, here's a quote from finnish Rumba music magazine ('89): "Danny said: I asked a girl for a cigarette and I first thought she was like joking when she said that she don't know if she dares to give, I was like yea yea, but she told that her friends had warned her not to come to the gig she'll get beaten up. I was thinking like whatta hell? How can people think that when we come to some God forgotten place to play to them and hope they would dig it and they sit there piss in their pants scared that some one comes off the stage and beats them up!?"

Hard good old rock n roll. Motorcycling a major part of their image. They have a cover or two on every album except the last one, they covered Ted Nugent, AC/DC, Hurriganes, Sex Pistols, John Loudermilk (Tobacco Road, also covered by Zeppelin and David Lee Roth), Alvin Lee, Jerry Williams & Roadwork, Arlo Guthrie and Buddy Holly. That tells something 'bout their sound.

There is also another band by the same name.

An Australian Blues band, who are leaders and virtual pioneers in their own genre - ?delta-blues wall of sound'. As a three piece, they can lift the roof off any venue ? moving from straight ahead, in your face, ?amped up' original blues - ?Blues 'not ?Roots' that is ? to ?all-acoustic' unplugged ?way down south' delta blues. Multi-media celebrity, Doug Mulray describes them as ?the best acoustic blues band in the country'.

Guitarist/ vocalist, founding member and key songwriter for the band, Dom Turner specialises in "bottle-neck" slide guitar using resonator, as well as 6 & 12 string guitars. Dom's influences are many and varied ? a blend of delta blues, piedmont blues, rock, dub and sounds of Asia.

A third band called the The Backsliders was an alternative-traditional country-rock band from Raleigh, North Carolina, composed of Chip Robinson, Steve Howell, Danny Kurtz, Jeff Dennis, and Brad Rice. Chip Robinson teamed up with Steve Howell to form The Backsliders, which began as a duo in 1991. The group formed in 1994, and disbanded in 1999.

Live At The Royal