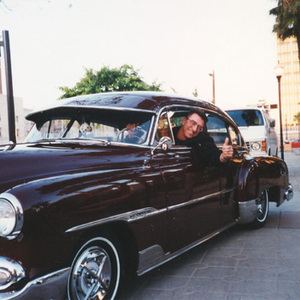 Pete Anderson can apply to three artists. Grammy-winning guitarist/producer Pete Anderson was born in Detroit and was initially a blues and r'n'b guitar player. After moving to Los Angeles, he began working with country artist Dwight Yoakam, with whom he played from 1984 to 2004, also producing Yoakam's recordings during that time. His solo recordings, on his own Little Dog label, showcase his love of roots and Americana music, and his blending of country, blues, and rock vocabularies, both as a guitarist and composer.

As a producer, he has worked with Roy Orbison, Michelle Shocked, The Blazers, and The Meat Puppets, among others.
The second Pete Anderson is indisputable king of 50's American rock'n'roll in Latvia, living legend, walking encyclopedia of American roots music. According to the research made by most authoritative expert on Soviet rock, famous music journalist Artemy Troicky, author of the book called ?Back In The USSR, The True Story Of Rock In Russia? (Omnibus Press, 1987), Pete was the very first true rocker in the entire former Soviet Union. Anderson is also the only entertainer from Latvia and the whole ex-Soviet, that is mentioned in ?Rockabilly Hall Of Fame?
http://www.rockabillyhall.com/RockClockTribute.html
The third Pete Anderson is a professor of Nutritional Sciences at the University of Wisconsin-Madison. He is most renown for his podcasted lectures of Nutritional Sciences 132, a introductory nutritional science course for non-nutritional science majors.

Enjoy The Ride! (With The Swamp Shakers)

Panic Boogie! (With The Swamp Shakers)

Rock Around The Clock (With The Archives)