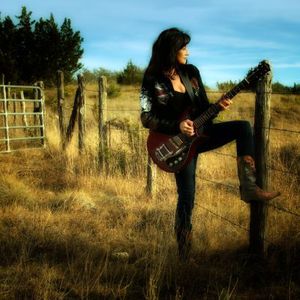 Born in San Antonio, TX and raised in Southern California, Rosie Flores' music blends the best of honky tonk, rockabilly, and jazz with the traditional sounds of her Tex-Mex heritage. Since the late 70s, she has been an important figure in the Los Angeles, Austin, TX and Nashville music scenes. Rosie's reputation as a high octane rockabilly star is well established. Critical raves from prestigious publications such as the Los Angeles Times and Guitar Player magazine leave no doubt about her talent for filling dance floors and lighting up rooms with her blazing guitar solos.

Rosie's solos recordings have found homes on both the Billboard and Gavin charts and are also featured in seven motion pictures. Her revved-up performances in honky-tonks from Boston to Bakersfield have won legions of fans and earned appearances on such nationally broadcast television programs as "Austin City Limits" and "Late Night with Conan O'Brian." Early in her career while recording for Warner Bros. Records she was nominated for best "Horizon Artist" by the Academy of Country Music in California. In the year 2000 she won the presitgious LA Weekly Music Award for Best Rockabilly Swing Artist.

Simple Case Of The Blues

Girl Of The Century (With The Pine Valley Cosmonauts)

Once More With Feeling