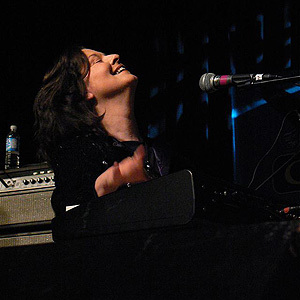 Contemporary Musicians | Lewis, Linda Gail Singer, songwriter Linda Gail Lewis is the younger sister of one of music's great performers, Jerry Lee Lewis. After decades of lingering in his shadow, she finally achieved a measure of fame in 2000 with a critically acclaimed album of duets performed with Irish rocker Van Morrison. Living a life every bit as tumultuous as her piano-thumping brother's, Lewis has toured the world repeatedly, married eight times, nearly died from drug overdoses, and has fought the ongoing battle of family-versus-career.

Linda Gail Lewis is the younger sister of one of music's great performers, Jerry Lee Lewis. After decades of lingering in his shadow, she finally achieved a measure of fame in 2000 with a critically acclaimed album of duets performed with Irish rocker Van Morrison. Living a life every bit as tumultuous as her piano-thumping brother's, Lewis has toured the world repeatedly, married eight times, nearly died from drug overdoses, and has fought the ongoing battle of family-versus-career. In the course of her musical career she has written and sung a variety of music, some good and some comically bad. Her style, which has embraced hard-core honky-tonk music, 1950s rock 'n' roll, and touches of Memphis soul, has made her a favorite in Europe.

Like her brother Jerry Lee, Linda Gail Lewis soaked up the sounds of hillbilly music and rhythm and blues in the rural areas of Ferriday and Black River, Louisiana. Although the Lewis family was poor, they always had enough to eat because of father Elmo Lewis's skill at farming. When Jerry Lee began to score hits with "Whole Lotta Shakin' Goin' On" and "Great Balls of Fire" in 1957, he singlehandedly lifted the family from dire poverty to a life of relative ease. "Jerry shared everything he had with us," Linda Gail remarked in a personal interview. "He'd call my mama up and say, 'Mama, I want you and daddy and Frankie Jean and Linda Gail to have everything that I have.' And we did!.? I don't know how many people would say that. He meant it too." Linda Gail's chief inspiration was Jerry Lee, but later, as the era of rock 'n' roll came into play, she also tuned into the sounds of Brenda Lee, Patsy Cline, and Lavern Baker. Like her famed elder brother, she was married many times, and her first marriages were at ages 14 and 15.

Toured with Her Brother

Lewis's official recording debut came when she performed as Jerry Lee's duet partner for Sun Records in 1963, where her defiantly off-key vocals turned their rendition of George Jones's "Seasons Of My Heart" into one of the worst records ever made. "I've gotten a lot of criticism for the vocals I did early on," Linda Gail said in an interview. "I hate to say it was a mistake to do it, because it is a part of history and something I remember in a fond way, but I wish I could've sung that song a little bit better."

As a teenager Lewis joined her brother on the road, playing in numerous tank towns and dives. Yet according to Lewis, her brother shielded her from the late night parties and exploits that were common to a touring rock 'n' roll band. "Oh yeah, he did take care of me," she remarked. "He protected me.? I knew that after the gigs I wasn't welcome to be at these parties. I knew I was just going to be watching the late, late show if I was lucky enough for one to be on in my motel room."

The near-constant touring provided Lewis with valuable experience and a chance to sharpen her vocal skills, and resulted in a unique opportunity?a steady gig with the road company of ABC-TV's mid-1960s teenfest Shindig. "It was great," remembered Lewis. "Jack Good [Shindig's producer] actually asked for me. My brother didn't have to give them the hard-sell and say 'Would you please have my sister on too?'"

Lewis's first solo release, the ABC-Paramount single "Small Red Diary," sank into obscurity, as did a lone single for Columbia, a remake of LaVern Baker's "Jim Dandy." Meanwhile, Lewis made several duet appearances on her brother's b-sides and albums for Smash records. It was only after Jerry Lee mounted his late-1960s comeback via country music that Lewis was finally able to ride his coattails onto the charts. Recording with her brother, she scored her lone top ten country hit with a version of Carl and Pearl Butler's "Don't Let Me Cross Over." A rousing duet remake of Chuck Berry's "Roll Over Beethoven," a staple of her act, followed it onto the lower chart regions. The Lewis duo's 1969 Smash LP Together featured their rowdy duet style on a variety of country standards and rockers. This led to Lewis's debut solo album for the label, The Two Sides Of Linda Gail Lewis, a hard sung but poor-selling country album.

In addition to composing material for her brother's top-selling Smash and Mercury discs, Lewis also garnered an ASCAP award for her song "Smile, Somebody Loves You," her only solo top 40 country hit. She was growing artistically, but her label did not seem to notice. "Nobody was really serious about my career," declared Lewis. The best pure country singles of her career, 1970's "Before The Snow Flies," which featured a rare appearance by brother Jerry Lee on rhythm guitar, and 1973's "I Wanna Be a Sensuous Woman," which she debuted on ABC-TV's In Concert, received no meaningful push from the label.

While her recording career languished, Lewis toured almost non-stop as part of her brother's show. She twice married and divorced his best friend and road manager, Cecil Harrelson, and then married Jerry Lee's guitarist/fiddle player Kenny Lovelace, with whom she often wrote songs. The constant touring wreaked havoc on her relationship with her two children, and her drug use took a toll on her health. The drugs were prescribed by several physicians, none of whom knew she was under treatment by others. Lewis recalled that a mistake may have saved her life. "I slipped up by calling one doctor who found out about the other doctors?about three or four of 'em were giving me these things." Lewis was hospitalized as a result of her drug habit, and Jerry Lee picked up the tab, but her efforts to stay clean and sober alienated her from her brother. By 1977 she had had enough?she quit the act, married a man outside the music industry and started a new family.

After a hiatus of nearly ten years, Lewis returned to music in the late 1980s, touring briefly with Jerry Lee before belatedly going solo at age 39. Realizing that her brother's piano was an important facet of her public identity, Lewis taught herself to pound the keys in his style. The return to show business ended her marriage to her sixth husband and threw her into the arms of Robert Ellis (aka Bobby Memphis), a professional Elvis impersonator. The two played clubs throughout the mid-South before they bitterly parted company, and she then married former Stax promotion man Eddie Braddock. Lewis finally caught a career break when the New Rose label in France released International Affair, her first solo album in 23 years. Well regarded by critics for its raw, openly country sound, the album did not get much distribution in the United States, but put the European rock community on notice that she was available for shows. Returning to Memphis in 1996, she recorded a strong mix of country songs tinged with rock 'n' roll for Icehouse, titled Love Makes the Difference, although few outside the south had access to the disc.

Lewis made her biggest splash outside the recording studio when she entertainingly chronicled her years on the road in a 1998 autobiography titled The Devil, Me, and Jerry Lee. The book showcases Lewis's genuine voice and attitude, which is by turns catty, philosophic, salacious, and funny. Characterizing herself as a "spoiled little b***h," Lewis reveals sordid details of her eight marriages and dealings with her estranged children, few of whom describe her in a positive light. However, her memories of Jerry Lee provide the slim volume's high points. At the book's end, she poignantly portrays her brother as an aging rocker suffering the whims and financial machinations of his then-current wife, with the threatened removal of his only surviving son being a whip that was used to keep him in line.

Awards: ASCAP Airplay Award for "Smile, Somebody Loves You," 1972; inducted into Rockabilly Hall of Fame, 1998.

The attention garnered by the book led to Lewis's self-titled 1999 album on Sire. Boasting higher production values than her previous discs, and including songs written by Motown legend Smokey Robinson, Sam Phillips's son Jerry Phillips, and Nashville fire-brand Tim Krekkal, the album represented Lewis's best solo work. However, the disc has yet to be released in America. "I don't know if they're ever going to release it in the states," said Lewis.

Lewis's biggest career boost came via legendary Irish rocker Van Morrison. Fittingly, Lewis met Morrison at a Jerry Lee Lewis convention in England. After a sound-check jam session, Morrison proposed the collaboration, which resulted in the 2000 Pointblank/Virgin album You Win Again. "All this happened within two weeks," Lewis remembered. "The album he had scheduled to release he put on the shelf in favor of this one. Then, Van wouldn't commit to releasing the album until we knew how it was going to work live. Well, we had so much fun at the gig that we cut two more songs." The album reached the pop charts and sold strongly at the duo's live shows. It became Lewis's best-selling disc.

Splitting her time between residences in Wales and Big Sandy, Tennessee, Lewis has continued to play European rock revival venues. In 2003 she released Out of the Shadows, an album of soul and country pop recorded in Austin, Texas. The disc was supposed to mark her independence from her brother's trademark sound, but fans reacted cooly. Her follow up, Boogie Woogie Country Girl, featured her return to Jerry Lee's piano-thumping ways.

Although Lewis has not attained major success as a solo act, she has continued to savor opportunities to make fresh music. "It should be an inspiration to a lot of women my age," she declared, "because I am fifty-three and I'm still learning, still growing as a talent. Today I am a hundred times better songwriter than I was a year ago. I'm ten times a better singer than I was a year ago. I'm willing to say that I can still learn something and I can still grow!"

Lewis, Linda Gail, with Les Pendelton, The Devil, Me, and Jerry Lee, Longstreet, 1998.

Additional information was obtained from an interview with Linda Gail Lewis, 2003.

A Family Affair (Live In Concert)

A Family Affair - Live In Concert