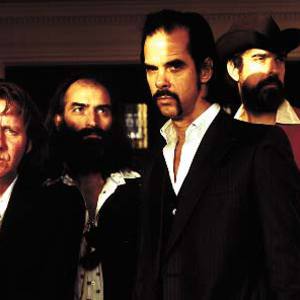 After heavy touring throughout 2005 in support of Abattoir Blues/The Lyre of Orpheus, Cave began writing songs on guitar, an instrument he rarely played. His rudimentary playing gave the new material a rawer feel than much of The Bad Seeds' output. The group entered Metropolis Studios in London to record the original Grinderman demos and it was this material that would eventually become the basis for the band's self-titled debut album, which was recorded with long-time friend, producer Nick Launay, in April 2006 at RAK studios, London and mixed in October at Metropolis Studios.

Grinderman was released in March 2007 and was applauded by critics for its raw power, similar to that of Cave's celebrated post-punk project The Birthday Party. The band made their live debut at the All Tomorrow's Parties Festival in Somerset, United Kingdom the following month. This was followed by a one-off show at The Forum in London on 20 June. "No Pussy Blues", was released as a single on 19 February, "Get It On" was released as a single on 8 January 2007 and on 30 April, the band released their final single from their debut album, "(I Don't Need You To) Set Me Free".

Grinderman opened for The White Stripes at their Madison Square Garden show on 24 July 2007, followed by several of their own American tour dates. The band then embarked on a theatre tour of Australia, opening for a Nick Cave "solo" set, which consisted of the same band members. The band also launched the official Grinderman web site in March 2007. Amongst other things, the site includes The Grinderman Podcast, featuring a series of fragments of recordings from the band's writing sessions. Though not complete songs, the sessions offer a unique insight into the workings of the band. New episodes were said to appear regularly over weeks and months. Five recordings have been submitted so far.

On 11 May 2007, the band performed "Honey Bee (Let's Fly To Mars)" and "No Pussy Blues" on the BBC television music show, Later... with Jools Holland. The band made their US network television debut on the CBS television show The Late Show With David Letterman also performing "Honey Bee (Let's Fly to Mars)" on 23 July 2007. Grinderman were one of the headliners at Roskilde Festival 2008 in July, the biggest festival in northern Europe. They joined big names such as Radiohead, Neil Young and Jay-Z at the top of the bill.

The followup, Grinderman 2, was released worldwide on September 13 2010 and a day later in the United States. The album ? which was recorded through various studios in London in 2008-2009 ? featured the single, "Heathen Child", released on September 6. Ellis has described the album as "like stoner rock meets Sly Stone via Amon D??l", "very diverse", and "psychedelic."

Grinderman split in 2011, with Cave announcing that the band was "over" at the conclusion of their set at the Meredith Music Festival.