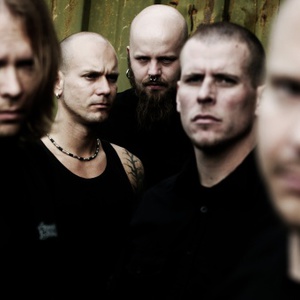 The first one was recorded in Sunlight Studio with demon-producer Tomas Skogsberg behind the wheels. It resulted in a three track and intro demo limited to 500 copies titled ?The Ancient Gate?. Later in an interview Skogsberg named EVOCATION as ?the best demo band he ever had recorded?. Previous to the second recording Christian ?Kricke? Saarinen, reinforced the EVOCATION line-up as bass player. The second demo contained four tracks and was recorded in a local studio. Later on both demos gathered cult status within tape trader communities and are nowadays considered as true gems from the early years of the Swedish Death Metal scene. After the recordings EVOCATION did shows with nowadays legendary Death Metal outfits such as Ceremonial Oath, Dark Tranquillity, Dismember, Liers in Wait etc.

Dead ? deceased, but life goes on (1993-2004)
In the beginning of 1993 EVOCATION had gained reputation as a ferocious live band and was considered as one of the most interesting Death Metal acts from Sweden. Creating their own unique mix of the Gothenburg and Stockholm Death Metal sound made waves in the Death Metal scene. Despite the fact that several labels contacted the band, EVOCATION was put on indefinite hiatus in the autumn of 1993 due to musical differences. In 2001, the band was contacted by BREATH OF NIGHT RECORDS (distribution by MERCILESS RECORDS) and in November 2004 EVOCATION returned from the dead as the two demos from the early 90s were released worldwide as a full length, self titled album.

Tales from the Tomb (2005-2008)
In the summer of 2005 EVOCATION was about to start rehearsing again. Before the reunion bass player Kricke parted ways with the band since he neither had time or energy to start playing again. As a replacement, a new four stringed bender called Martin ?Tore? Toresson was recruited in the summer of 2005. After having recorded a three track demo in 2006, EVOCATION inked a multi album deal with the German label CYCLONE EMPIRE RECORDS in the beginning of 2007. In April 2007 the ?Tales from the Tomb? album with artwork by Dan Seagrave saw first daylight. TFTT earned massive appraisal all over Europe and was also voted on position 4 of ?Best album of the year? in 2007 by all journalists of Metal Hammer (DE). In support of the album EVOCATION played numerous Summer Festivals including Wacken Open Air (DE) and Jalometalli Metal Music Festival (FI).

Apocalyptic (2010-)
In early 2010 EVOCATION started to record the third full length album titled ?Apocalyptic?. For the production of the new album the band has been working in EVOCATION Studio. Drums have been produced together with Roberto Laghi (In Flames, Hardcore Superstar etc.). Mastering duties was once again handled by the excellent crew at Studio Mega (Sonic Syndicate, Katatonia etc.). Cover artwork & layout has been made by the Polish artist Xaay (Behemoth, Nile etc.). After having established themselves as one of Sweden's most important Death Metal acts during the last years, this album sees EVOCATION take Death Metal to another level both as musicians but also as songwriters. No one will be left untouched by Apocalyptic. The album will be promoted by the band with massive Touring and Festival shows. The European release is scheduled for the 29th of October through CYCLONE EMPIRE RECORDS. Apocalyptic will also be licensed in the US & Canada by METAL BLADE RECORDS

Tales From The Tomb