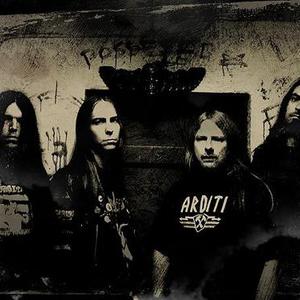 Demonical was spawned in March 2006 - by former Centinex members Johan Jansson (guitars & vocals), Martin Schulman (bass) and Ronnie Bergerst?hl (drums) - with a mission to return to the roots of death metal and deliver a sheer dose of darkness and brutality. The first audio assault - a four track promo attack entitled "Bloodspell Divine" - was recorded at Necromorbus Studios during July the same year. The disc packed with true swedish hellfire received great reviews and reactions within the scene and led to several offers from interested labels.

The first audio assault - a four track promo attack entitled "Bloodspell Divine" - was recorded at Necromorbus Studios during July the same year. The disc packed with true swedish hellfire received great reviews and reactions within the scene and led to several offers from interested labels.

In November 2006 Demonical added vocalist Ludvig Engellau to the line-up - 'cause Johan wanted to fully concentrate on the six-string axe - and signed a worldwide multialbum deal with german Cyclone Empire. The bands first full-length album - entitled "Servants Of The Unlight" - was recorded at both Black Lounge and Necromorbus Studios during January and February 2007 and released in April the same year.

In November 2007 Temple of Darkness released a limited Demonical/Absu 7?EP featuring one track from the ?Bloodspell Divine? promo.

Since the album was released Demonical has toured Europe twice. First during July 2007 with Nunslaughter and Nominon, followed by a track in November 2007 with Denial of God.

Demonical did also play at the German Up From The Ground Festival in August 2007, supported Dismember on four shows in Finland during and played at the legendary Polish Metalmania Festival in March 2008. On top of that the band has played several shows in Scandinavia together with Grave and Necrophobic among others.

In December 2007 the band parted ways with vocalist Ludvig Engellau due to musical and personal reasons. Demonical continued for a few months with various session vocalists until late March 2008 when Sverker ?Widda? Widgren came on board as the new fulltime frontman.

During 2008 the band continued to support "Servants of the Unlight" by doing shows and festivals such as Obscene Extreme in Czech Republic, Rockmaraton in Hungary and Hells Pleasure in Germany.

Between December 2008 and February 2009 the band recorded their second full-length ? entitled ?Hellsworn? ? at Necromorbus Studios.

It was released in May 2009 and was supported by a headlining European tour and several summer-festivals.

A split 7"EP with Paganizer was released by Cyclone Empire in early 2010. This limited vinyl featured an exclusive Demonical track recorded at the "Hellsworn" session.

In September 2010 Demonical once again entered Necromorbus Studios in the dark suburbs of Stockholm in order to record "Death Infernal", their anticipated third full-length album. The album was recorded throughout the fall and was released by Cyclone Empire in April 2011 both on CD and vinyl presenting the bands most well-thought, elaborate and groundbreaking work up to now.

Demonical is located in Avesta, Sweden.