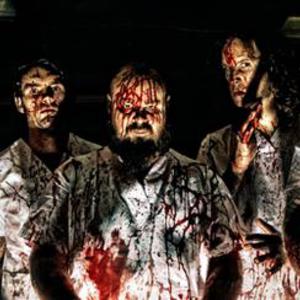 General Surgery is a goregrind band formed in 1988 in Stockholm, Sweden. The band is a side project of various members of swedish death metal acts. The original line-up comprised of Richard Cabeza on vocals, Carbonised guitarist Jonas De Rouche, Grant McWilliams on bass and then Carbonised vocalist Matti K?rkki on drums. The project's first demo was titled 'Erosive Offals'. McWilliams departed prior to the second demo 'Pestiferous Anthropophagia' in 1990. General Sugery's line-up then virtually disintegrated, leaving only K?rki remaining.

The tracks recorded for the American EP were to surface as the 'Necrology' EP on relapse records in 1991. The initial 1000 copies came in blood red vinyl and, as the pressings soon sold out, Relapse reissued the EP on CD, with two extra tracks, in 1994.

With General Sugery on hold, Matts Nordrup would surface in Crematory. General Sugery would reform in 1999 citing a new line-up of Matti K?rkki on vocals, Grant McWilliams on vocals, guitarist Joacim Carlsson, bassist Richard Cabeza and Nasum man Anders Jakobson on drums. The band soon got back into action contributing their version of 'Empathological Necroticism' to a Deathvomit Carcass tribute album. However, Jakobsen would depart and the group pulled in the temporary services of Erik Thyselius of Stockholm's Construcdead. Chris 'Piss' Barkensj? of Repugant and Kaamos would take the drum stool in February of 2001. By 2002 it would be the Birdflesh and Dethronement credited Adde Mitrouliu (a.k.a. Smattro Ansjovis) enrolled as new drummer. Richard Cabeza would team up with premier Black Metal act Dark Funeral for North American touring in the Spring of 2002.

A General Sugery split album shared with The County Medical Examiners was issued by Razorback Records in 2003. In September of that year General Sugery boosted their numbers with the addition of Scurvy, Bombstrike and Repugant credited second guitarist Johan 'Bosse' Wallin. Further split releases were projected with Spanish Horror-Grind outfit Machetazo and the bizarre Japanese band Butcher ABC, both via Escorbuto Recordings.

Bassist Andreas Eriksson decamped in January of 2004, the band drafting Regurgitate's Glen Sykes as temporary fill in. As such, General Sugery announced that they were to perform live for the first time in over fourteen years, this momentous event taking place Club Nocturnal in Gothenburg on Valentine's day. By May guitarist Johan Wallin and Regurgitate bassist Glenn Sykes had enrolled full time. That same year guitarist Joacim Carlsson and former drummer Erik Thyselius formed up part of the resurrected Face Down.

Promoting the album 'Left Hand Pathology', released through Listenable Records, General Sugery were set to engage in the 'Pathology Over Europe' tour in March 2006, supported by Grimness 69, but cancelled when singer Grant McWilliams left. However, in mid June the group revealed that McWilliams had returned and newly installed on bass would be Dr. Van Touminen of Fingerspittzfehn and The Gokenburgers.

General Sugery teamed up with Impaled and Butcher ABC for the "Gore Over Japan Tour" in September.