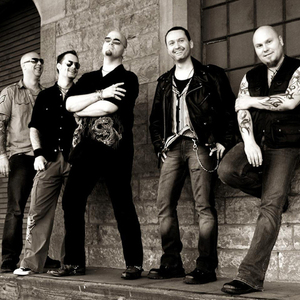 In January 2006 songwriter/bass player PAUL LOGUE of CRY HAVOC and United States born and bred vocalist MICHAEL EDEN decided to form a rock solid partnership cemented in Metal. The two were 100% positive that the music created between them would break down walls worldwide and have people asking questions. The two new friends spoke for hundreds of hours being creative before making a battle plan.

This ballistic force of singer and songwriter soon recruited English drummer PETE NEWDECK, who is currently the heart pounding force behind the STEVE GRIMMETT BAND. He earned his stripes by playing drums for PAUL DIANNO'S KILLERS and THE SHOCK. These three unstoppable musicians were on a quest for the perfect guitar sound and attitude, as well as a guy who possessed rock solid ability above everything else. Enter former DEMON DRIVE and ATTACK guitar virtuoso THORSTEN KOEHNE of CODE OF PERFECTION.

Koehne's name was looked at because his current manager CARSTEN LIZARD SCHULZ brought it to the bands attention. Schulz is also the vocalist in EVIDENCE ONE, MIDNITE CLUB and formerly of DOMAIN. Logue and Schulz immediately struck up a friendship and the two, along with Eden, co-wrote the majority of the album's material. Schulz also brought a left over EVIDENCE ONE track "Eyes Of The World" to the table. Written by himself and ROBBY BOEBEL, his partner in EVIDENCE ONE and guitarist for FRONTLINE. The two are best known for their critically acclaimed 2004 NUCLEAR BLAST release "Tattooed Heart".

MICHAEL EDEN, PAUL LOGUE, PETE NEWDECK and THORSTEN KOEHNE were now on a mission and it was now nearing the time of putting this puzzle together. A name was chosen from dozens of ideas between the guys in the band and EDEN'S CURSE was born.

Using the singer's last name was a natural choice according to the guys in the band. It had nothing to do with ego. Everyone has input into all decisions musical or otherwise. Michael would have it no other way and has been quoted as saying ?Without these guys I'm just a singer without a band. These guys are more than my band. They are my friend's?. Teamwork above all other things make this newly formed band a force to behold. The four musicians soon discovered that the glue to hold it all together was none other than current AXEL RUDI PELL, ULI JON ROTH and ROUGH SILK keyboard player FERDY DOERNBERG. Ferdy completed the international line up by joining as a permanent member in late June 2006.

Melodicrock.com's "Producer of the Year 2005 and PINK CREAM 69 bassist DENNIS WARD was secured to oversee the mixing and mastering of the album. Ward's involvement in the album turned out to be far more significant when Eden and Logue traveled to his studio in the South of Germany in late August 2006 to record the lead and backing vocals. Logue persuaded Ward's PINK CREAM 69 vocalist DAVID READMAN to join the backing vocal army for the record, as the pair had co-written together on the formers forthcoming debut solo. The backing vocal army also consisted of current YNGWIE MALMSTEEN, CORNERSTONE, ex-RAINBOW and MIDNIGHT BLUE vocalist DOOGIE WHITE, and the aforementioned CARSTEN LIZARD SCHULZ.

In Summer 2007 the band signed to heavy weights AFM RECORDS in Germany for the European release of the album and penned deals with SPIRITUAL BEAST (Japan), DYNAMO RECORDS (Latin America) and METAL MAYHEM MUSIC (North America) for a worldwide assault!

EDEN'S CURSEwill take no prisoners in this game of Rock N' Roll. They will curse you if you curse them. Game on!!

Live With The Curse CD2

Live With The Curse CD1