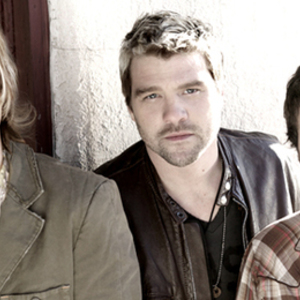 Where Doc Walker's 2009 release, GO, focused on the endless comings and goings that characterize life on the road, their new album, 16&1, finds the band looking back at the roots that they've grown so deep over time, celebrating how far they've come since first putting them down and moving forward all the stronger for having done so. That said 16&1 doesn't play like some pensive re-examination of the past.

That said 16&1 doesn't play like some pensive re-examination of the past. It may find the band taking a trip down memory lane at times, but it's a lane with a big old bush party waiting at the end of it, and a trip Doc Walker seem intent on taking at high speed in a vintage Silverado?

Named for the crossroads of two major prairie lifelines not far from where Doc Walker settled in to record their 5th record on Canadian country label, Open Road Recordings, 16&1 represents something of a homecoming for the Manitoba based band, particularly for lead singer, Chris Thorsteinson. In fact, by choosing a former schoolhouse in Westbourne, Manitoba as the site for recording the album, Thorsteinson is touching down very close to home, literally across the road from the house he grew up in. ?From grades one to six it's actually where I went to school,? he says. ?I never thought we'd be recording our seventh record in a town of 100 people, in a classroom where I used to sit, while I'm looking out the window at my parents place.?

Although many the songs on 16&1 were born out of the region the band grew up in, guitarist/vocalist Murray Pulver says, it also represents a departure from past efforts, both sonically and in terms of the band's recording process, which, for Thorsteinson, involved a dramatic expansion of his role in the studio.

When Westbourne Old School first closed down, Thorsteinson and his father bought the property, but were unsure of what to do with it until the band began looking for a place to record. After going a little gear crazy while trolling E-Bay for equipment to put into his freshly christened ?Old School Studio', Thorsteinson soon found himself acting as de facto assistant engineer for 16&1 producer, John MacArthur Ellis (Jane Siberry, Jeremy Fisher, Ridley Bent) ? an experience that's changed his perspective on recording irrevocably. ?Assistant engineers are my new heroes,? he says. ?They just never stop.?

Typically, when Doc Walker recorded in Nashville in the past, Thorsteinson admits he was often the first to light out of the studio when his vocals were finished ? Not an option when you're both studio owner and the person largely responsible for outfitting the studio with occasionally impenetrable, vintage recording technology.

Overall, however, recording close to home resulted in a far more relaxed vibe says guitarist/vocalist Dave Wasyliw. ?When you're spending $1000.00 a day in a studio, you're always watching the clock.? It's very much like taking a long cab ride, he adds. ?You're always watching the meter and that's not the best way to get your best performance on tape.?

?Musically,? Pulver adds, ?it also really made things flow. We had no pre-conceived notions as to what something should sound like.? That's clear right from the opening riff of lead single ?Country Girl', a song that showcases the band's adoption of a decidedly more freewheeling, riff-based, electric sound that stands in stark contrast to their previous acoustic heavy efforts.

It's also a product of recording the entire record with their longtime rhythm section, Brent Pearon (bass) and Steve Broadhurst (drums). That approach energized the band's writing and recording process substantially, Wasyliw says, describing the communication between Pearon, Broadhurst and the rest of the band as being almost akin to telepathy. ?On stage, we rely on subtle gestures and expressions to communicate, and that allowed us to really read each other during the recording process to judge what was working, or, more importantly, what wasn't.?

Ripping it up in the studio with Broadhurst and Pearon also found Wasiliw and Pulver making subtle, but definite nods to the signature brand of prairie rock they grew up on. Particularly on tracks like ?Never Letting Go' and the standout ?Where I Belong'; a celebration of small town life in Westbourne that's so rich in detail, you can almost smell the breeze off the lake and feel the dust of the back roads settling on your skin.

That doesn't mean the band has lost sight of the core elements that have traditionally made their music stand out from the pack. Their blindingly tight, trademark harmonies, compact arrangements and relentlessly hooky sing along choruses are all still there. On 16&1, however, Doc Walker have definitely ramped up the rock a notch or six, and nowhere more so than on their blazing cover of the Bob Seger car chase classic, ?Get Out Of Denver' and album closer ?Tailgate Revolution', with it's dueling guitars and amped up R&B vocal arrangements.

16&1 is still country to the core, but it's definitely sonically denser than 2009's GO, featuring instrumental highlights like the contributions of sax player Kirsten Nash and one man horn section, Colin Weinmaster on ?I Disappear Now', for example ? a Crash Test Dummies cover on which Brad Roberts also joins Thorsteinson on lead vocals. On every track, however, Ellis' production style leaves ample room for each voice to shine through. Ellis also lends his own substantial talents as a keyboardist, slide and pedal steel player to songs like ?Hard Act To Follow' and country ballad ?Do It Right', among others.

While 16&1 finds the band stretching out some musically, that's a natural extension of the ethic on which they've built a reputation as one of Canada's hardest working live acts; an ethic that's served them exceptionally well over time, garnering the band some of the Canadian Music Industry's highest awards. Among them, the 2009 Juno for Country Recording of the Year and a total of 11 Canadian Country Music Awards, including the 2008 CCMA Fan's Choice Award, as well as Album, Single and Songwriters of the Year for 2008's Beautiful Life.

On the strength of GO, the band has also received multiple nominations for the 2011 CCMA's, including Fans' Choice, Group or Duo of the Year, CMT Video of the Year, and Country Music Program or Special of the Year. Additionally, Pulver and drummer Steve Broadhurst have been nominated individually in the 2011 CCMA All Star Band Category.

Even with several mantelpieces worth of hardware to their credit, and a growing international profile that has resulted in three Australian tours in the past 18 months, Doc Walker refuse to rest on past laurels. ?After awhile the ?tried and true' becomes ?been there, done that',? Wasyliw says simply. ?With every new album we evolved to some degree. It's a little more drastic this time out, but I think it's exciting to go to work and not know what'll happen next.?

Even when they first began compiling ideas for 16&1 while jamming on stage and in their tour bus, Doc Walker knew they were on to something fresh. ?When we got together and wrote the riffs for ?Are You With Me Tonight' I remember thinking, man, imagine playing this live,? says Wasyliw. And although the track sounds like a love song, it's actually meant to speak directly to their audience, he says. ?We had a gig coming up in Dawson, so, in our minds, we were thinking about how to get the crowd on our side, and to do that you have to ask ?Are You With Me Tonight?' The ?relationship' aspect we actually added later.?

Though 16&1 is a bit of a sea change for Doc Walker, it reflects the values that have made them so enduringly popular over time and speaks as much about their pride in their roots as it does of the affection and gratitude they have for the fans that continue to flock to their shows year after year. And that, at the heart of it, is the most important thing, Thorsteinson says. ?Let's not kid ourselves, everybody wants to sell a million records, but on this record we forgot all about that. All we wanted to do was write a record that we love, and that we know our fans are going to love and want to sing along to.?