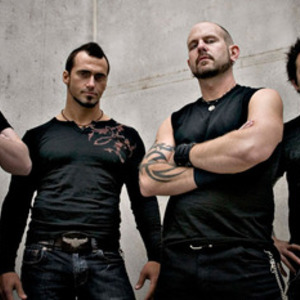 Destrophy is a well-established 4 piece rock/metal machine based out of central Iowa, United States, recently signed to Victory Records. The band was officially launched in 2002 by producer and singer/songwriter Ari. The story goes that Ari scoured the state and recruited only the most talented, success-minded, musicians to help him bring his brain child to fruition. The result is an impressive line-up including Ari, guitar and vocals, Phil T. bass, Joe Fox on drums, and Bruce Swink, former member of Roadrunner Records, Stone Sour and Downthesun, on guitar.

Destrophy has secured a solid foothold as one of the brightest contenders in the modern independent music industry. The bands catchy signature sound and dominating live shows continue to draw large crowds and enthusiastic responses from their continually growing fan base, both here in the US and overseas.

Simply stated Destrophy is a well-oiled, business oriented machine. The members of the band and their representation are long-time friends and have stood by the decision to avoid the industry's traditionally corrosive elements and temptations such as senseless internal conflict and substance abuse. The true focus is on creating high energy, inspiring music with huge commercial potential!

The Way Of Your World