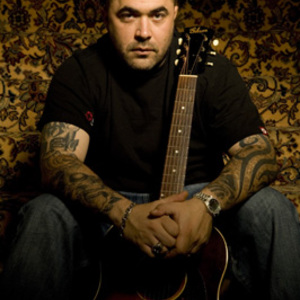 Aaron Lewis, born April 13, 1972 in Rutland, Vermont, USA, is the lead vocalist of the hard rock/post-grunge group Staind . According to the Country Boy Songfacts, growing up in rural Vermont, Lewis spent summers with his World War II veteran grandfather hunting and fishing. "Country was the background music to my childhood," said the singer. "My grandfather listened to Merle Haggard , Hank Williams, Hank Williams Jr. and all of the greats. When Staind did our first tour with Kid Rock in 1999, I rode the bus with him on a couple occasions, and we bonded over this music.

I haven't been able to let go of it since then."

Aaron Lewis was, before Staind, in an acoustic band known as JCAT

Lewis is renowned for his songwriting skills and has been nominated for 3 Grammys. His hobbies include fishing, golf and riding his mini dirt bike. He has worked in landscaping, cleaned hotel rooms, and played solo acoustic sets in bars around Atlanta. He is married to Vanessa Lewis and has three daughters, Zoe Jane, Nyla Rae and Indie Shay, as well as two sisters Yvette and Rachel.

He has been guest vocals for several songs by the band Cold and he also remixed Crawling for Linkin Park's album Reanimation.

Frayed At Both Ends (Deluxe Version)