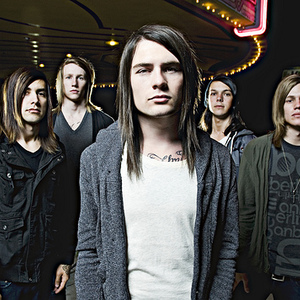 Confide was a metalcore band from Los Angeles, California, United States formed in 2004. They have released two EP's: Innocence Surround and Introduction, a demo and three full length albums: Shout The Truth, which was re-recorded and re-released when Joel Piper joined the band, and their latest widely discussed album Recover. Confide officialy announced they're breakup up on October 4th 2010. All former members (in order of joining):

They have released two EP's: Innocence Surround and Introduction, a demo and three full length albums: Shout The Truth, which was re-recorded and re-released when Joel Piper joined the band, and their latest widely discussed album Recover. Confide officialy announced they're breakup up on October 4th 2010.

Confide was formed by Joshua Plesh, Aaron Van Zuthpen, Billy Pruden, Jason Pickard and Jeffrey Helberg. They were in the same youth group and wanted to start a hardcore band. Two EP's were recorded in this formation: Innocence Surround and Introduction.
In the end of 2006, drummer Jason Pickard left the band and was replaced by John Paul Penton. Joshua Plesh also left the band. Ross Kenyon (who was fronting Penknifelovelife at that time) contacted Jeffey Helberg through the internet and told him he wanted to sing in an American band because his girlfriend lived there.
After being in the States for three months, Ross was forced to move back to England and John decided to quit the band.
In July Ross moved back to California and Arin Ilejay joined the band on the drums. In this formation they recorded Shout The Truth and their videoclip for If We Were A Sinking Ship.

In March 2009 two new members were introduced to the band: Joshua Paul and Joel Piper. Aaron and Arin left the band because they wanted a normal life off the road.
With Joel taking over the clean vocals, they re-recorded Shout The Truth and also a cover of The Postal Service's 'Such Great Heights'. They also recorded a videoclip for that song.

In August 2009 Billy Pruden, bassplayer and founding member, left the band to do Biblical studies to move into full time ministry. He was replaced by Trevor Vickers.
Vickers was introduced on their national headliner tour 'Thriller Tour' with Agraceful. They also recorded a video for 'I Never Saw It Coming' in September.

In December 2009 the band recorded their new album with Joey Sturgis (Asking Alexandria, The Devil Wears Prada, Attack Attack!). The album was released in May 2010 and featured one single Tighten it up..

On October 4th, 2010, it was officially announced by Confide of their breakup. They have stated that they'll part ways when they return from their tour of Japan in early October. The band plans to play a handful of farewell shows on the West Coast. A statement released on behalf of the band says, "There is no easy way to say this at all but it's time to put an end to all the rumors you guys keep hearing about us breaking up. Unfortunately, the rumors are true and we wish we could have been the first to tell you guys but there are reasons why we couldn't release this statement until now. We want to be 100% honest with you guys and let you know the real reasons that Confide will be no longer because you deserve to know. First of all, we want to let you know that each member of the band remains friends and the band breaking up was a positive thing and nothing bad happened to result in this. After being a touring band for over three years now, Confide is on the road for nine to ten months out the year and for some people in the band, it was getting to be a struggle to be gone so much, living in a van, sleeping in parking lots and not eating/sleeping well. We absolutely love making music, playing shows and especially meeting/hanging out with fans but we feel God has a new chapter for our lives right now. Around two weeks ago, Joshua, Trevor & I (Ross) sat down and talked about how we felt about touring and how it is really taking a toll on our lives. After the talk, we then sat down as a full band and told Jeff & Joel how we felt and they were very understanding and knew exactly what we were going through. Jeff & Joel discussed keeping Confide going but we decided as a group that it would be for the best if Confide came to an end after our Japan tour, which is in early October. Each member of the band will continue to work in the music industry in some way or another, whether it be in a band, work for a record label/management company, work in a studio, or whatever it may be, we're not giving up on music and you will definitely hear from each of us again. We hope that you guys will show each of us the same support that you have shown Confide over the years. Since the beginning, Confide has been a band that strives to help, encourage and inspire people and even though the band will be no more, we want you guys to still be able to talk to us on a personal level so if you ever want to talk or just say hey, please never hesitate to contact us through our facebook, twitter or myspace profiles. As a huge thank you to our fans, we will be doing a bunch of farewell shows. We'll post dates and details on the farewell shows once we get back from Japan and figure all of that out. We want to thank fans and give you guys a chance to come to a show and celebrate the life of Confide with us."