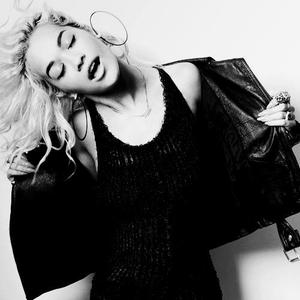 Rita Sahat?iu Ora, better known as Rita Ora, is an Albanian-British singer-songwriter from London, UK. Born in Pri?tina, Kosovo in 1990, Ora's family moved to London where she was raised. According to the Hot Right Now Songfacts, during her early teens Ora attended the Sylvia Young Theatre School, whose other notable alumni include Emma Bunton and Amy Winehouse. Her first UK exposure came after several collaborations with British singer Craig David.

Her first UK exposure came after several collaborations with British singer Craig David. She also auditioned for BBC talent competition 'Your Country Needs You' - the prize of which was to represent England at the Eurovision Song Contest - but withdrew her application.

In 2009, she signed a recording contract with Jay-Z's label Roc Nation and relocated to America. The How We Do (Party) Songfacts reports that when Ora visited Clear Channel with Jay-Z to present music and videos from her debut release, the executives were so enthused by what they heard that they organised for How We Do (Party) to be immediately premiered on DJ JJ's afternoon show on New York's top hit music station WHTZ (Z100). Her debut album ORA was released on 26th August, 2012.

How To Be Lonely (CDS)

Only Want You (CDS)

Let You Love Me (CDS)