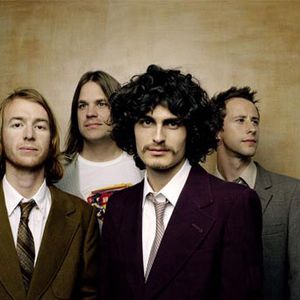 Thirsty Merc is an Australian rock band formed in 2002 in Sydney, Australia. The band consists of Rai Thistlethwayte (vocals/guitar/keyboards), Phil Stack (bass guitar), Karl Robertson (drums), and Matt Smith (guitarist). Thirsty Merc have released one EP entitled First Work, and 3 studio albums; Thirsty Merc, Slideshows, and Mousetrap Heart. The band has sold over 200,000 albums, has toured extensively around Australia, and have received heavy airplay in Australia on an impressive number of songs.

Thirsty Merc have released one EP entitled First Work, and 3 studio albums; Thirsty Merc, Slideshows, and Mousetrap Heart. The band has sold over 200,000 albums, has toured extensively around Australia, and have received heavy airplay in Australia on an impressive number of songs. After breaking through onto the Australian music scene they were nominated for four ARIA Awards in 2005 and Rai was nominated for Song of the Year at the APRA Awards in 2008 for Thirsty Merc's top 2 airplay hit 20 Good Reasons. Their song In the Summertime was selected as the theme song for the Australian TV reality show Bondi Rescue and has been the theme song for seven consecutive seasons.

Three of the founding members of Thirsty Merc - Karl Robertson, Matthew Baker and Phil Stack - had played together in bands in Dubbo in regional NSW. In 2002 they teamed up with Sydney-sider Rai Thistlethwayte to form a band called "Thirsty"; soon after, they moved to Sydney and renamed themselves "Thirsty Merc". The band's name comes from a gas guzzling Mercedes Benz which belonged to lead singer Rai when the band was first rehearsing. The name also is a play on the phrase 'Thirsty Work:' The band members used to say that it was 'thirsty work' being in a rock band.

Thirsty Merc's first EP, First Work, was released on 8 September 2003 on the band's own label Don't Music label. The EP had been recorded independently during downtime at a studio that lead singer Rai worked during the days. The EP's only Single Wasting Time achieved radio airplay on Australian Radio stations Triple J and Nova but failed to chart. The self funded music video to the single became the 'ripe clip of the week' on Channel V. After extensive gigging around Sydney's pubs, reps from Warner Music approached the band after watching the band perform live at the Hopetoun Hotel in Surry Hills, and soon after at the Annandale Hotel.

Thirsty Merc's debut studio album was the self titled Thirsty Merc, released on 16 August 2004. The band again chose to work with Warner Music Australia. The album spent 48 weeks on the ARIA Albums Chart, peaking at #15, and launched the band in the Australian mainstream. The album reached #29 on New Zealand's RIANZ chart. The band worked with producer Lindsay Gravina on the album, who had been producing Australian bands over the past 15 years or so, notably The Living End and Magic Dirt. The band's debut was entirely recorded and mixed on 2 inch tape, and mixed by Gravina himself at his Melbourne studio, Birdland Studios.

Prior to the touring of Thirsty Merc's Debut album, guitarist Matt Baker left the band, and was replaced by Sean Carey, whom the band had met when they played a support slot to Carey's band at Kings Cross venue/club 'Club 77. Slideshows, was released on 21 April 2007 via Warner Music Australia. The album was the band's most successful release yet, peaking at #4 in Australia, although it was less successful in New Zealand, only reaching #38. The album's first three singles, 20 Good Reasons, The Hard Way, and Those Eyes, achieved chart success, with 20 Good Reasons reaching #4 in Australia and #17 in New Zealand. The album's fourth single, Homesick, was released digitally, peaking at #57 in Australia.

After the release of Slideshows, Thirsty Merc toured extensively around Australia, playing an album tour in theatres nationally and then regional tours, the biggest of which had 38 shows booked across seven weeks.

Prior to the recording of Mousetrap Heart, lead guitarist Sean left the band indefinitely and this was formally announced on 14 January 2010. Sean was replaced by Matt Smith, who also plays with afrobeat and reggae band The Strides.

On 18 June 2010, Thirsty Merc released their third album, entitled Mousetrap Heart which was recorded mostly in LA with producer Matt Wallace, and two tracks produced in Melbourne with longtime Thirsty Merc producer Lindsay Gravina. The band toured nationally in July 2010 to support the new album. The lead single is the title track, which reached top 15 airplay in Australia and charted Top 30 on the ARIA Singles Chart. The band's next single, All My Life, was featured in the promotional clips for the AFL grand final in 2010. The official music video for All My Life was shot in early October 2010 in Bangkok, Thailand, and follows a narrative of 'heroic love' set on a Thailand military base. The video features Russian model/actress Maria Mazikova, 50 Thai army troops, an Iroquois helicopter and a Chinook helicopter. The All My Life video was directed by Adrian Van de Velde, who also directed the bands ARIA nominated clip In the Summertime.