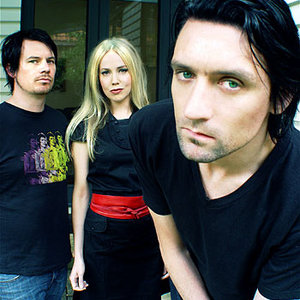 Something for Kate formed in Melbourne, Victoria in 1994. The founding members of the three-piece band were vocalist and guitarist Paul Dempsey, bass player Julian Carroll (later to be replaced by Stephanie Ashworth) and drummer Clint Hyndman. After recording a 7-track demo in 1995, the band signed to Murmur Records, a subsidiary of Sony. In 1996, they released the 7-track EP The Answer to Both Your Questions, recorded and mixed by Greg Atkinson of Sydney band Big Heavy Stuff.

After recording a 7-track demo in 1995, the band signed to Murmur Records, a subsidiary of Sony. In 1996, they released the 7-track EP The Answer to Both Your Questions, recorded and mixed by Greg Atkinson of Sydney band Big Heavy Stuff.

In November of 1996, the 3-track single "Dean Martin" was released. Early in 1997, the band released a 5-track EP titled Intermission as they recorded their first album, Elsewhere for Eight Minutes, in New Zealand and mixed and mastered it in New York with U.S. producer Brian Paulson. (Brian had previously produced albums for Wilco, Archers of Loaf, Superchunk and Slint, amongst others.) Something for Kate's first full-length album was released in July of 1997. Bass player Julian Carroll was then replaced by Toby Ralph, who toured with the band for the release of the album.

Four singles were released from Elsewhere for Eight Minutes: "Captain (Million miles an hour)", "Prick", "Working Against Me" and "Roll Credit". Bass player Toby Ralph was replaced by Stephanie Ashworth (of Melbourne outfit Sandpit) in March 1998. The band then wrote their second album, Beautiful Sharks, which was released in April of 1999. Beautiful Sharks was recorded in Melbourne, once again by producer Brian Paulson.

Four singles were released from Beautiful Sharks: "Electricity", "Hallways", "Whatever You Want" and "The Astronaut". When the band went on the road with this album they took on an extra touring musician, Wally Gunn, to play the incidental guitar and keyboard parts.

In 2000, as the band were writing for their third album, Murmur released Q & A With Dean Martin, a re-release of the sold-out first EP and single. Also released in 2000 was Big Screen Television, a video collection of 12 of the band's music videos along with some bonus footage.

In June of 2001, the third album, Echolalia, was released. Produced by the band and Trina Shoemaker (whose other recording credits include Queens of the Stone Age, REM, Whiskeytown and Sheryl Crow), Echolalia was recorded at INXS bass-player Garry Gary Beers' Mangrove studio in the Central Coast of NSW.

Four singles were released from Echolalia: "Monsters", "Three Dimensions", "Twenty Years" and "Say Something". When touring this album, the band took on two touring musicians, Pip Branson (ex Sydney band Sidewinder) and Simon Bourke, again, to play the increasing amount of keyboards and extra guitar parts featured on the album.

In 2002 the band released their first DVD, A Diversion, which is a document of the writing, recording and touring of the Echolalia album.

In 2003 the band recorded and released their fourth album, The Official Fiction. Produced once again by the band and Trina Shoemaker at Mangrove studios, it spawned the singles "Deja Vu", "Song for a Sleepwalker", "Best Weapon" and "Moving Right Along".

After supporting David Bowie on the Australian leg of his Reality Tour, the band toured Europe in 2004, taking in Germany, France, Denmark, Scotland, Ireland and the UK, before returned to Australia to release Phantom Limbs, a double album of the band members' and their fans' favourite b-side tracks from over the years.

Leave Your Soul To Science