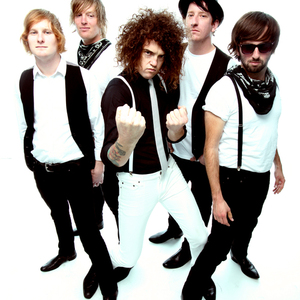 Something with Numbers are a rock band based in Australia. The band was formed on the New South Wales Central Coast, in Australia, in 1999. They have released an EP and three studio albums in their career. Something with Numbers found notable success in 2006, with the release of "Apple of the Eye (Lay Me Down)," which peaked at No. 34 on the ARIA Singles Chart, and placed No. 64 on the Triple J Hottest 100, 2006.

The name of the band derived from a friend's suggestion that the band's name should be "something with numbers" (meant in the vein of blink-182 or Sum 41). The band soon signed to small indie label, Below Par Records, and worked towards releasing their first EP, The Barnicles & Stripes, in 2002. Two years later, in 2004, Something with Numbers released their debut album, Etiquette.

The band continued to grow their sound and in 2006 they made their commercial break through, with the release of their second studio album Perfect Distraction in October of that year. Their 'Goodbye Mickey Finn' tour (the tour for the album, also the name of a track from the album) saw them play around the country with up-and-coming bands The Inches and The Lazys. The album featured a range of styles and genres, touching on soul rock and their usual punk rock sound. It featured three songs that were released as singles, the first - and most popular - being, "Apple of the Eye (Lay Me Down)". "Apple of the Eye" peaked at No. 34 on the ARIA Singles Chart, and placed No. 64 on the Triple J Hottest 100, 2006.[1] The second single from the album was "Chase the Chaser", which failed to reach the ARIA Singles Chart; however, it did receive airplay on Australian music network, Channel V. Something with Numbers played at the Sydney Big Day Out on 25 January 2007. Channel V described the show as having the "best mosh of the day". Other notable concert appearances for the band have been along side Lagwagon, Good Charlotte, Millencolin, The Ataris, and Panic! At the Disco.