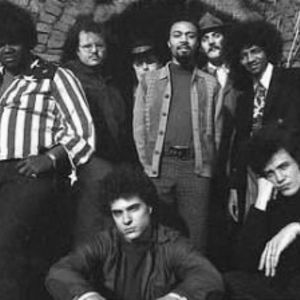 The Electric Flag, formed in 1967, was a blues rock soul group that consisted of guitarist Mike Bloomfield, drummer/vocalist Buddy Miles, vocalist Nick Gravenites, keyboardist Barry Goldberg, and bassist Harvey Brooks. Bloomfield formed Electric Flag after his stint with The Butterfield Blues Band. The band reached its peak with the 1968 release, A Long Time Comin', a fusion of rock, jazz, and R&B styles that charted well in the Billboard Magazine Pop Albums listings.

The Flag's initial recording was a soundtrack for The Trip, a movie about an LSD experience by Peter Fonda, written by Jack Nicholson, done with director Roger Corman.

With his great appreciation for blues, soul, and R&B, Mike Bloomfield wanted to create a group of his own that would feature what he called "American music." He was inspired not only by the big band blues of B.B. King, T-Bone Walker, and Guitar Slim (Eddie Jones), but also by the contemporary soul sounds of Otis Redding, Steve Cropper, Booker T & The MGs, and other Stax recording artists. He also drew inspiration from traditional country, gospel, and blues forms. He organized the Electric Flag, initially called the American Music Band, in the spring of 1967, not long after he produced a session with Chicago harp player James Cotton that featured a horn section. Bloomfield decided that his new band would also have horns and would play an amalgam of those American musics he loved. He and Goldberg assembled the group, under Albert Grossman's management, in San Francisco and immediately began working on its first project -- the soundtrack for the film The Trip.

The band made its debut appearance at the Monterey Pop Festival, the first of the '60s rock music extravaganzas. Now called the Electric Flag, the group was well received by the audience of 55,000, though its performance fell short of Bloomfield's high standards. Following Monterey, the Flag proceeded to tour the Northeast and perform in the San Francisco area while working on a recording for Columbia Records. Though a critical success, the Flag remained largely unknown to the general public due in part to the band's inability to complete its initial record.

By early 1968, drummer Buddy Miles had become a dominant force in the Flag's aesthetic direction. The group's repertoire by then included numerous contemporary soul covers which featured Miles and many classic blues tunes. The band produced fewer than a dozen original pieces, mostly written by vocalist Nick Gravenites, and Bloomfield's original "American music" concept appeared to have narrowed considerably. By May 1968, only a month after the release of the aptly-titled A Long Time Comin', Mike Bloomfield quit the group, and though they strove to carry on under the direction of Buddy Miles, the Electric Flag was effectively finished. Personality conflicts, differing esthetics, and a series of drug problems hastened the band's downfall.

Though the Electric Flag was together in its original configuration less than a year, the band did make a strong impression on critics and musicians, primarily in the San Francisco area where they were based. One of the first rock groups to include horns, the Electric Flag was contemporaneous with the earliest edition of Blood, Sweat and Tears with Al Kooper.

Al Kooper left BS&T in April 1968, and was inspired by a jam recording with Moby Grape to the organize the similarly structured Super Session album. He included Bloomfield, Barry Goldberg and, after Bloomfield left the session due to a bout of insomnia, Stephen Stills. Bloomfield and Kooper also toured together, while drummer and vocalist Buddy Miles went on to form the Buddy Miles Express and also play in Jimi Hendrix's Band of Gypsys.

A reunion of sorts took place in 1974 with the Electric Flag releasing The Band Kept Playing, but the recording was not a commercial or critical success and the band quickly disbanded after several months of sporadic gigs.

On July 28 and 29, 2007, a concert took place at the Monterey County Fairgrounds commemorating the 40th Anniversary of the Monterey Pop Festival. One of the acts featured was a one-time reunion of The Electric Flag, anchored by original members Gravenites, Goldberg, and Hunter, backed by members of the Tower Of Power and The Blues Project. The one hour set featured material from the first album, as well as several blues covers.

Old Glory - The Best Of (Vinyl)