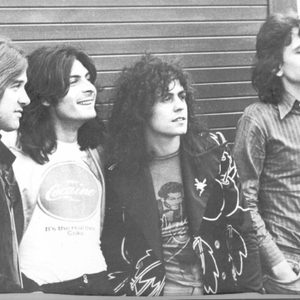 T.Rex or Tyrannosaurus Rex and sometimes known as Marc Bolan & T.Rex) were an English rock band fronted by guitarist, singer and songwriter Marc Bolan. The band were established as a folk rock group in 1960s London, as Tyrannosaurus Rex and released their debut album in 1968 "My People Were Fair and Had Sky in Their Hair... But Now They're Content to Wear Stars on Their Brows" which reached number 15 on the UK chart.

They achieved mainstream success in the 1970s as a glam rock group with hits such as "Hot Love", "Get It On", "Telegram Sam" and "Metal Guru". In the mid 70s the band's commercial success waned and T.Rex was forced to break up in 1977 after Bolan was killed in a car accident.

Zinc Alloy And The Hidden Ride

A Beard Of Stars

My People Were Fair And Had Sky In Their Hair