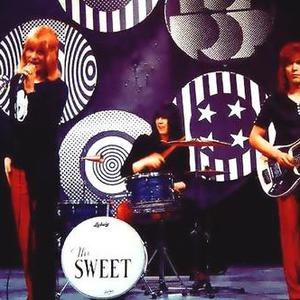 Sweet (referred to as The Sweet on albums before 1974 and singles before 1975) were a popular 1970s british band. Although Sweet were largely known for their glam rock image, and several hit singles ? many of them being so-called teenage anthems ? they also released several albums throughout a ten year career. The extent of Sweet's domination of the charts in Europe resulted in eight number one singles in Germany, with pop oriented tunes as "Co Co", "Little Willy", and "Wig Wam Bam".

Although Sweet were largely known for their glam rock image, and several hit singles ? many of them being so-called teenage anthems ? they also released several albums throughout a ten year career.

The extent of Sweet's domination of the charts in Europe resulted in eight number one singles in Germany, with pop oriented tunes as "Co Co", "Little Willy", and "Wig Wam Bam". Sweet's success continued with more rock oriented tunes, such as "Blockbuster", "Hellraiser", "Ballroom Blitz", "Teenage Rampage", and "Fox On The Run". The group had a world-wide following (clocking up no less than 18 top 20 hit singles) and were most notably popular in the UK, Germany and Australia.

The classic Sweet line-up consisted of vocalist Brian Connolly, drummer Mick Tucker, bassist Steve Priest, and guitarist Andy Scott. Sweet are perhaps best remembered for their glam stage clothing - glitter, platform boots, chain mail shirts, and makeup - practically defining the camp extreme of the glam rock look. Scott would later say it only happened because they needed an excuse to meet Top of the Pops dancers Pan's People and reasoned that going to the make-up room was a good method of doing so.

In late 1978, Sweet stayed at The Town House studio, Shepherds Bush, London, to write new material for their next album. Just before Brian Connolly announced his departure, his vocals were erased from the recorded material for the ensuing album Cut Above The Rest. Two album tracks titled "That Girl" and "Stay With Me" featuring Connolly on lead vocals remain from the late 1978 Cut Above The Rest recording sessions.

On February 23, 1979, Brian Connolly left the band under acrimonious circumstances, and neither he, nor the band, fully recovered. Connolly was particularly suffering from the effects of heavy alcohol drinking. Alhough all the Sweet members lived the extreme rock lifestyle during the 70s - with alcohol, drugs, and women, among other things - the others weren't as severely affected as Brian. After Connolly's departure, Sweet continued as a trio, with Scott and Priest now both handling lead vocals. Keyboard player Gary Moberley completed the four-piece line-up. Two more studio albums, Water's Edge, and Identity Crisis were recorded in 1979 and 1980 before the group finally disbanded in 1981. Sweet performed their last live show at Glasgow University on March 20, 1981. In 1982, Identity Crisis was only released in Germany.

In 1985, Andy Scott and Mick Tucker re-formed Sweet with various new vocalists and bass players, the most notable being a 1986 reunion featuring Paul Mario Day (the first singer of Iron Maiden), keyboardist Phil Lanzon, and bass player Malcolm McNulty (who is now lead singer for fellow glam rock band Slade). Steve Priest was asked to join Tucker and Scott for the 1985 Australian tour, but declined at the last moment. Vocalist and bass player Jeff Brown joined in 1988. In 1991, Mick Tucker departed due to ill health, leaving Andy Scott as the only original member. He was replaced by German Bodo Schopf. After Tucker's departure, Andy Scott changed the band's name to 'Andy Scott's Sweet'. Brian Francis [McManus] Connolly died from liver failure and repeated heart attacks, attributed to his chronic alcoholism, on 9 February 1997, aged 51, having been content in his final years to appear in retrospective documentaries demonstrating the damage he had inflicted upon himself. He was cremated after a ceremony at Most Holy Name Roman Catholic Church at Old Mill Lane, Denham, Buckinghamshire and his ashes were scattered over the water by his adult daughters Nicola and Michelle. He also left an ex-wife, Marilyn, and a two-year-old son called Brian Junior (BJ) by his girlfriend Jean.

Michael Thomas (Mick) Tucker died 14 February 2002 in Welwyn Garden City, Hertfordshire from leukemia, aged 54; his funeral took place 25 February 2002. He is buried in an un-named grave in Chorleywood House cemetery. It is marked by a sleeping angel. A wooden bench with a brass plaque funded by fans as a dedication to Mick is also positioned in the grave's vicinity.[2] He left behind a widow, Jan, and a daughter Ayston from his first marriage to Pauline (?1979). According to Steve Priest: "He was the most underrated drummer that ever came out of England. He was the powerhouse of the band. He was technically marvellous. His timing was impeccable, but he had a lot of soul as well and he really felt what he was playing."

At least one of Sweet's two remaining members is still active in the music industry. Andy Scott currently continues to tour as 'Andy Scott's Sweet'. February 2006 saw the release of a new Suzi Quatro album, Back To The Drive, which was produced by Scott. March 2006 saw the U.S. release of a new AS Sweet album, Sweetlife (from 2002).[3] [4] In October 2006, Scott staged a performance of AS Sweet to help save his home town football team, which was experiencing serious financial difficulty.[5]

Priest resides with his family in Los Angeles, California. He has published his autobiography, Are You Ready Steve?, which was a raw expose of his time with Sweet and in 2006 released Priest's Precious Poems, a CD of tracks largely comprised of his more recent material.

Are You Ready?: Sweet Live