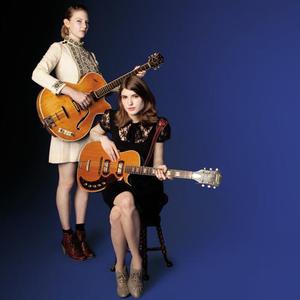 At school in rural England during the mid-late?90s, best mates Katherine Blamire and Jessica Davies hoped they'd one day escape their home town and dive headlong into the landscape and myth of America, the promised land of their dreams. Little did they know that by 2010, they'd have lived in New Orleans and Vancouver, recorded with 21st century icon Jack White and toured across continents. And now they're releasing a debut album that fulfils the promise of their earlier singles.

Through Low Light And Trees is an exquisitely shivery blend of alternative folk-rock and a more humid, bluesy brand of Americana, a sound both eerily ancient and thrillingly modern, with beautifully interlocking harmonies and guitar parts behind the spectral melodies. ?Instead of learning how to sing or play individually in a conventional way, we've learnt by bouncing off each other, and fitting in with each other.? says Katherine. ?It's a connection we wouldn't have found anywhere else.?

That connection began in the school choir, and deepened by picking up their parents' guitars and obsessing over Jessica's mum's vinyl albums collection, dominated by American ?70s classics: ?The first time I heard Crosby, Stills, Nash & Young, when those harmonies kicked in, there was nothing else like it.? Katherine grins. ?Those old records sounded so otherworldly.? A year spent in New Orleans in 2002 also helped shape their sound which evolved even further when, back in England, they discovered more British folk at the Sidmouth Folk Festival. ?ometimes the way you find out who you are is by first leaving it behind.? says Jessica.

With their band name in place - Smoke Fairies alludes to the summer mist that collects in the hedgerows of Sussex's narrow country lanes - the duo started gigging. But restless and adventurous, the pair moved again, this time to Vancouver, drawn by the mountains and sea. Flitting between jobs and short on money, their year in Canada was, ?an intense experience? says Katherine. ?But a lot of our songs came from that time. You have to let the mayhem out somehow.?

Jack White was early to respond to their music, when he heard one of their self-released singles and offered to produce a track for his third man label at his Nashville studio. Recorded in just 36 hours, with White on drums (and ?mad guitar solo? on River Song) and his Raconteurs/Dead Weather pal Jack Lawrence on bass, Gastown/River Song was released in December 2009.

After another spell of writing last winter the Fairies headed for Sawmills studio in rural Cornwall in the Spring to start work on their debut album with producer Head (best known for his work with PJ Harvey) and their current live band.

Through its 11 tracks, Through Low Light And Trees smoulders with an honest, often painful emotional intimacy. ?A lot of our songs are drawn from the experience of travelling around and leaving, or feeling distant and out of place, and the heartache that comes from looking back and longing.? says Katherine. Summer Fades, Morning Blues, Feeling In Turning Blue, Storm Song and After the Rain all tap a well of loneliness, when relationships stumble and crumble. Hotel Room and Blue Skies Fall tap a more optimistic view of love but elsewhere, Devil In My Mind is inspired by, ?dark, menacing,? London (?in the end, we're country people at heart?) while Erie Lackawanna (the end destinations of a train route that once ran past Jessica's grandfather's house in New Jersey) concerns old age, and change. So does Dragon, albeit like a dark English fairytale, where the narrator wishes to be eaten by a murderous dragon, ?to take her out of the pain after everyone else has been killed around her.??

And yet in person, Katherine laughs, ?We're genuinely quite cheerful! On stage, we can indulge in some ridiculous banter, and then we play something quite moody and mournful.??

Smoke Fairies' own fairytale continues to unfold. Having toured with Richard Hawley across Britain late last year and then being heralded as one of the bands to see at this years SXSW festival, they then headed off to the states to support Laura Marling for a month and recently released Ghosts: A Compilation of A-Sides, B-Sides and an EP from the Recent Past exclusively for the US market. Most recently Jessica and Katherine added supernatural, angelic backing vocals to Richard Hawley's current EP False Lights From The Land. When the calibre of White and Hawley are entranced, you know this isn't fairy-tale, but the absolute truth.

Through Low Light And Trees