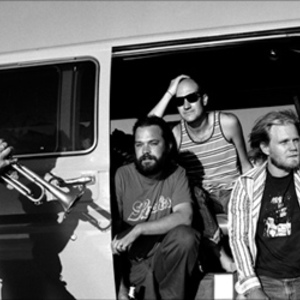 This San Francisco, California group was formed in 2004 by Ethan Miller of Comets On Fire with Ian Gradek. John Moloney (of Sunburned Hand of the Man) joined the group to record the first album, self titled and released by Birdman Records. This has caught comparisons with the early Grateful Dead and the ear of label impresario Rick Rubin. Upon Moloney's departure in 2006 the group was recreated to record "Magnificent Fiend", co-released by Birdman and American Records in 2008.

Upon Moloney's departure in 2006 the group was recreated to record "Magnificent Fiend", co-released by Birdman and American Records in 2008. This group included Mike Jackson, Ethan Miller, Ian Gradek, Joel Robinow (guitarist from Drunk Horse) and Garett Goddard and at various times during tour and the recording Eli Eckert (guitarist and singer of Drunk Horse) and Brad Truax.

Howlin Rain are currently dug deep into rehearsals that have spanned the entire year of 2009 and will result in their 3rd album due in 2010 with the third incarnation of the band, including Ethan Miller on guitars and vocals, Joel Robinow on keys, horns, guitar and vocals, Raj Ojha on drums, and Cyrus Comiskey on bass guitar.

Under The Wheels Vol. 2

Under The Wheels: Live From The Coasts, Vol 1