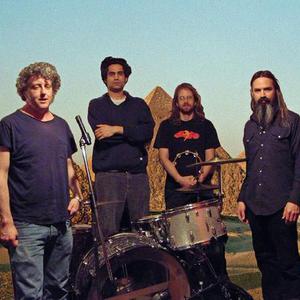 Its songs sound something akin to the icy garage rock of early Echo & the Bunnymen crossed with the sun-bleached tremolo-punk of The Scientists. There are hints of krautrock, the trance-inducing organ haze of Suicide, Deerhunter style dance-drone, classic desert-fried garage psych and the mysterious, obscure Japanese lysergic-rock band Les Rallizes Denudes all mixed into one explosive whole on Wooden Shjips self-titled Holy Mountain debut.

The experience of Wooden Shjips (yes, shjips, not ships) has been equated to that of the Japanese phenomenon called maboroshi, which is somewhat similar to seeing a mirage or hallucinating in time. In the context of imagination/dreams, maboroshi is attributed to past occurrences and can take on a meaning like "phantoms." The group's songs seem to exist in a dream state in which anything is possible.

Wooden Shjips released two acclaimed records in 2006, beginning early in the year with the self-released 10? EP Shrinking Moon for You. The record quickly sold-out, after capturing the attention of well-regarded tastemakers, such as Tom Lax and Byron Coley, who penned rave reviews on Siltblog and in The Wire magazine, respectively. A 7? followed on the Sick Thirst label, and received similar praise from music bloggers, as well as from veteran scribe David Fricke in Rolling Stone.

The band has three new releases lined up for 2007: the LP/CD for Holy Mountain, a 7? for Sub Pop and a 7? for Pollymaggoo Records. They played at NoisePop 2007 with Roky Erickson in March, as well as playing a packed showcase at the SXSW Music conference in Austin, TX.

Back to Land (Australia & NZ Edition)