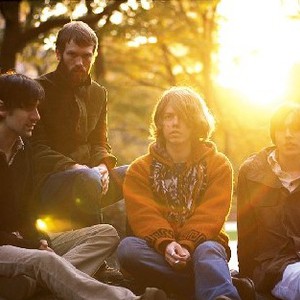 Dead Meadow met in the DC punk/indie scene, though their music draws from more faraway sources. The band formed in the fall of 1998 from the ashes of local bands The Impossible Five and Colour, when singer-guitarist Jason Simon, bassist Steve Kille, and drummer Mark Laughlin set out to fuse their love of early 70's hard rock and 60's psychedelia with their love of writers J.R.R. Tolkien and H.P. Lovecraft.

Dead Meadow released their six-song debut in 2000 on Fugazi bassist Joe Lally's Tolotta Records, and a joint vinyl release on D.C. indie label Planaria Records. In 2001 the band released its second album, Howls From The Hills, on Tolotta. Whereas the first self-titled album was recorded in their practice space for a couple hundred dollars and plenty of learning curves, Howls From The Hills was born in a barn in Liberty, Indiana. Their sound fuller without losing its live essence, the band grew to encompass everything from ambient guitar drones to surging psych-funk sludge, blues-folk tunes to barbiturate space-rock, and some southern slow boogie thrown in for good measure.

In spring 2002, original drummer Mark Laughlin reluctantly quit the group, replaced by old friend and previous collaborator Stephen McCarty (whose grandfather's farmhouse is where the band recorded Howls From the Hills). Also in mid-2002 the band found an unlikely patron in Brian Jonestown Massacre's Anton Newcombe, who recorded, produced and printed Dead Meadow's live disc 'Got Live if You Want' it on his "Committee to Keep Music Evil" imprint of the legendary Bomp label. Soon after, they recorded a Peel Session at the Fugazi practice space - the first time the BBC recorded a Peel Session outside their own studios.

Shortly after signing with Matador in 2003, Dead Meadow self-produced 'Shivering King And Others' in the basement studio of the DC Pirate House over five months and during a busy schedule of touring. Along with the heavy rockers and bluesy numbers as on the previous two records, the band went deeper into the psychedelic realm, with chiming acoustic touches and lovely, disorienting ballads.

With the addition of 2nd guitarist Cory Shane and beautifully spacious production, 'Feathers' opens up the Dead Meadow sound still further, seeming at once more experimental and more accessible than anything they've recorded thus far. The record captures the famous intensity of their live show, but songs like "At Her Open Door" and "Stacy's Song" reveal an obsessive beauty as jarring as sheer volume. Jason's guitar virtuosity is at its peak, as influenced by the droning modal character of Eastern music as by classic rock riffs. Ever deeper, Dead Meadow remain one step ahead of expectations.

The Nothing They Need

Howls From The Hills

Shivering King And Others

Got Live If You Want It!