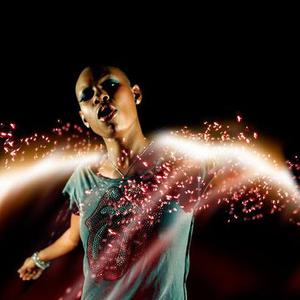 1) A pseudonym of British rock singer / guitarist Deborah Anne Dyer (b. 3rd Aug 1967, Brixton, London, England), lead vocalist with Skunk Anansie. Under this name, she d?buted solo with the single "Trashed" (June 2003, EMI) and the latest is "Tear Down These Houses" (Dec 2007, Sony BMG Music Entertainment).

After Skunk Anansie split, Skin released her debut solo album "Fleshwounds". The album was toned down from her Skunk Anansie days and seemingly Skunk Anansie fans never took to it. After releasing "Fleshwounds", Skin went on to perform various solo gigs around Europe. She was also support for the European leg of Robbie Williams' and Placebo's world tours. After touring, she began to record her second album, "Fake Chemical State", which was released in March 2006, preceded by a new single 'Just Let the Sun' on 6th March 2006. The first single from this album was "Alone in My Room", a download only track released on 7th November 2005. "Alone in My Room" was also the name given to Skin's first UK solo tour in two years, which started in Berlin on 4th November, 2005.

Her second album, Fake Chemical State, was released on 20th March 2006. She is currently working on her third, as well as touring with the reformed Skunk Anansie.

2) A Swans side project, of Michael Gira and Jarboe. The first album: Blood, Women, Roses was released in 1987 and had Jarboe singing lead vocals with Gira doing occational backing vocals. This LP had cover versions of Cry Me a River and The Man I Love along with original material from the artists themselves. Later came 2 12"s: Girl: come out and One Thousand Years and in 1988 the 2nd LP Shame, Humility, Revenge was released, on which Gira provided lead vocals, with Jarboe doing backing vocals on several tracks. In 1990 they changed name to 'The World of Skin', and released '10 songs for another world' LP, in which both Gira and Jarboe provided lead vocals. There's no significant difference between Skin and Swans, the music is the same in many senses. It could be said that the change to Skin marked a slight change in style of the music in that it became slower and more emotional.

3) A British hard rock band, fronted by Neville MacDonald with Myke Gray on guitars, Dicki Fliszar on drums and Andy Robbins on bass.

Skin were formed in the early 1990s by ex-Jagged Edge members Myke Grey and Andy Robbins (also formerly of Tokyo Blade & Shogun) along with former Kooga vocalist Neville MacDonald and drummer Dicki Fliszar, formerly from Bruce Dickinson's touring band and band Vamp. Originally called Taste, they went through a number of names as they played a smattering of small club dates throughout 1992. The band showed enough quality on these dates to be offered a management deal with Sanctuary Management, who also handled Iron Maiden and, ultimately, a record deal with Parlophone. Through Maiden vocalist Bruce Dickinson, the band came to the attention of noted American producer Keith Olsen who offered to produce their debut at his 'Goodnight LA' Studio. During 1993, the band flew to LA and began recording. Once the sessions were finished, the band listened to the finished product and decided more was needed so another three songs were recorded with Shay Baby producing.

Prior to the release of the album, the band finally decided upon the name Skin (someone had written it down on a wall) and embarked upon a fourteen-date UK tour supporting Little Angels. Another support tour, this time with Thunder helped swell their growing fan base and, in 1993, they released their debut single The Skin Up EP. This was followed by House of Love before their first UK chart single "Money".

1995 saw Skin consolidating their fan base by recording and releasing Live at the Borderline. A very limited edition CD of classic rock cover versions given away free with Kerrang! magazine, only 50 were available and it has become one of the most prized collectors items among Skin fans although a Japanese import version was released shortly after. In order to capitalise upon their appearance at Gateshead Stadium supporting Bon Jovi, the band also recorded and released Take Me Down to the River as a double CD along with some of the Borderline cuts.

The Bon Jovi appearance marked a high and low point in the career of Skin. A gig that would potentially give excellent exposure was marred by a fault with the band equipment as a voltage converter was incorrectly installed to USA settings by a stage tech which resulted in blowing Myke's guitar amp and Colin's hammond organ.

1996 marked the first time that touring keyboard player Colin McLeod was featured in promotional artwork as well as the music video for single "Perfect Day". Despite this, Colin was a part time member as he wanted maintain a funk orientated direction he was continuing at the same time.

Neither the second album, "Lucky" or the two singles, the first being "How Lucky You Are" and "Perfect Day" achieved the chart success of the debut album. The progression of British chart music at this time, along with the lack of backing for rock music in the mainstream media, led to the band being dropped by Parlophone.

Despite this, Skin still held a Japanese record contract and the third album "Big Fat Slice of Life" was finished and released in 1997. Awaiting a UK release, the band released a self-financed two track CD single "Degeneration" that was distributed through the fan club. Later that same year they released their fourth, and final, studio album Experience Electric on Snapper Music. "Experience..." marked a revised version of the Japanese release with several tracks being reworked. "Ride The Blue Wave" evolved into the title track from the album, but "Big Fat Slice..." and "Degeneration" were omitted due to the fan club release. The album went on to top the indie charts at number 1.

During this period, Skin toured relentlessly. The albums was shopped to several American record companies, and met with mogul Jonathan King. Following the culmination of the tour to promote the album, skin announced they would be emabarking on their farewell tour in 1998.

The final Skin concert at the LA2 in London, was recorded and released as a double live album Hasta La Vista, Baby! on Reef Records (a subset of Snapper Music). Since the band's demise, a number of un-official releases have been issued featuring rare and unreleased tracks. These tracks combined of what would be the fifth UK album, and a large collection of demos that didn't make it on the debut.

In March 2009 it was announced that Skin would reform to play the Download 2009 Festival.