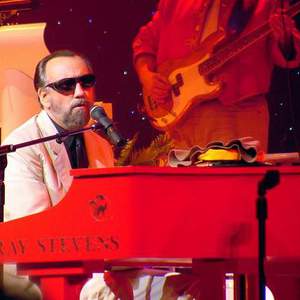 There are two artists with this name. One being the Ray Stevens who recorded the theme of 1980s Steven King horror movie, Cat's Eye. The other is the Stevens' with the recording career which began with two singles released on Prep Records, followed by a short stint with Capitol Records. Both these recording contracts were made with the help of Atlanta, Georgia music maven Bill Lowery. Stevens joined Lowery's National Recording Corporation in 1958, where he also was a member of the NRC staff band, playing numerous instruments, arranging, and doing background vocals.

When NRC went into bankruptcy, he signed with Mercury Records, and started a series of hit records in the 1960s that included "Ahab the Arab" and "Jeremiah Peabody's Polyunsaturated Quick-Dissolving, Fast-Acting Pleasant-Tasting Green and Purple Pills". The later song held the record as the longest title to hit the Top 40 chart until being surpassed in 1981 by the Stars on 45 Medley, whose official title included the titles of 10 other songs because of copyright requirements.

Stevens became a producer and well-known studio musician on the Nashville scene, and recorded hits for Monument, Barnaby, Warner Brothers, MCA and RCA. Perhaps his most famous hit is "The Streak" (1974), which poked fun at the early-1970s "streaking" fad of running nude in public; this was a No 1 in both the UK and the USA. His novelty song "Bridget the Midget (The Queen of The Blues)" made No 2 on the UK chart in 1971

Stevens' biggest hit was his gospel-inflected single "Everything Is Beautiful" (1970). A plea for love and tolerance during turbulent times in the United States, the song shot to Number 1 there. Stevens has won two Grammy Awards: one for "Everything Is Beautiful" and one for the arrangement of his country and western version of the jazz standard "Misty" (1975). He also recorded a version of Glenn Miller's "In The Mood" in the style of a clucking chicken, under the pseudonym Henhouse Five Plus Too. This was a Top 40 hit in the US and UK.

With the popularity of the song "Everything Is Beautiful", Stevens had a variety show on CTV. The Ray Stevens Show appeared in Canada in 1970 and soon appeared in the United States on NBC and the United Kingdom on the BBC. Although it only has eight episodes, it is mostly known for being the show that launched the career of regular cast member Steve Martin.

Ray Stevens was inducted into the Nashville Songwriters Hall of Fame in 1980. Since the 1980s, Stevens has appeared regularly at the country music performing venue of Branson, Missouri. 2005 was his last year for performances in Branson. Currently, there are no scheduled performances anywhere for the year 2006.

His talents have been showcased in a successful series of videos.