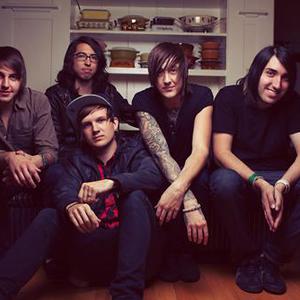 Of Mice & Men is a metalcore band formed in Costa Mesa, California, United States in 2009 by Austin Carlile and Jaxin Hall. Their current line-up consists of Austin Carlile (ex. Attack Attack!), Phil Manansala, Valentino Arteaga (ex. Lower Definition), Aaron Pauley (ex. Jamie's Elsewhere) and Alan Ashby. After recording Someday Came Suddenly and touring with Attack Attack!, Austin was kicked out of the band. After that, Austin decided to start something new on his own. He asked one of his best friends Jaxin Hall from New Zealand to be his partner in crime and a part of whatever he did next.

The two got their friends in Though She Wrote and Miss May I to help them write and record the song "Seven Thousand Miles For What?" they had been working on. The next day they posted it and made a MySpace page. Five days later the inevitable happened. They joined up with the two people that had stood by them since day one. Rise Records and Artery were always considered family, and after hearing the song, they were signed.

Solidifying the line up with Valentino Arteaga from Lower Definition on drums, Shayley Bourget from Covette on guitar and vocals, and Phil Manansala from A Static Lullaby on guitar, Of Mice & Men recorded their debut self-titled album.

On April 5, 2010, Of Mice & Men announced on their MySpace that Austin Carlile was no longer in the band due to an inability to tour because of heart surgery and a personal feud with the guitarist. He was replaced with former Sky Eats Airplane vocalist Jerry Roush. After completing all of Bamboozle Festival 2010, Of Mice & Men took part in the 2010 Vans Warped Tour.

Jerry Roush was then stranded by the band and Austin invited back in after his heart condition got better and when Austin and the rest of the band made amends. They then toured on the 2011 Warped Tour and have released their second album, The Flood.

In early 2012, the clean vocalist Shayley Bourget left the band due to personal issues. At present, Austin Carlile has taken over all vocals. Later that year, they took part in the 2012 Vans Warped Tour.