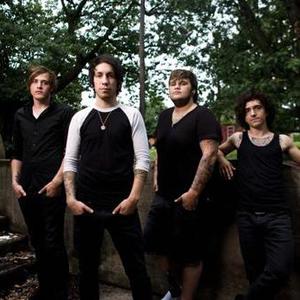 It's deafening, the sound of An Early Ending's notoriety. It is not in the wicked screams, the sweetly searing guitar lines, or the signature drop of the 808 that define their music as a furious sound for a furious time. No, the sound of their success only comes in the spaces between their songs, as an ever growing roar from their rapidly increasing fanbase. That roar is the collective power of this group of fresh faced kids, it is their ability to excite, to thrill, and to crush both their audience and their critics with their music.

When child hood friends Logan Summey (drums) and Alex Runk (vocals), first dreamed up having a band in 2004 they certainly never thought they would get to play with their heroes in Haste the Day twice in one year. After all, they were just freshmen in High School at the time, and it was not even so long ago that they managed to recruit Justin Wantz (Guitar), Greg Hildabrand (Guitar), and Paul Stager (Bass). Despite their relative youthfulness An Early Ending has moved forward, earning the title of Harrisburg's undisputed heavyweight champions of metal. They find themselves constantly on tap for shows from Philly to Pittsburgh and consistently being called upon to help support bands such as Haste The Day, August Burns Red, Calico Systems, and From A Second Story Window. How could they have realized the trajectory of their ascent? In all likelihood, they just woke up one morning, late for school after playing the Trocadero and realized that their once fledgling project had taken on a life of its own, one which has the potential to be more than just a cool way to steal girls from the football team.

As 2007 moves forward, the boys from An Early Ending are preparing for a number of firsts: their first official release, their first summer tour, and their first record deal. This is the future of these young phenoms, most of whom aren't old enough to have a voice recognized by this country; that hardly matters though, the fans in the audience are hearing An Early Ending loud and clear.