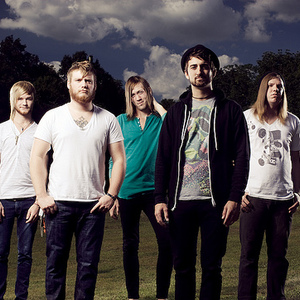 Akissforjersey are a post-hardcore 5-piece from Pilot Mountain, North Carolina, United States signed to Tragic Hero Records. They formed in 2004 and split up in the beginning of 2009. On December 24th 2009 they announced on a MySpace blog that they re-formed. They are currently writing a new album, which should be released sometime in 2012. With their colliding musical stylings, and experimental vocals, Akissforjersey doesn't seek to stand out of the crowd; they tower above it.

With their colliding musical stylings, and experimental vocals, Akissforjersey doesn't seek to stand out of the crowd; they tower above it. In the same vain as such progressive artists as The Mars Volta, Akissforjersey pulls two completely different aspects of music together to make one complete genre of its own. The band's music lulls the listener into a carefree utopia one moment only to pull them to the ground with the brutal screams perfectly injected into their melodious songs. Since their formation in July 2004, the band has taken North Carolina by storm, leaving only dust in the wind, while stepping to the forefront of the highly popular Christian-Hardcore scene. Keep Your Head Above Water, the debut full length from Akissforjersey proves that the band never disappoints. With crunching breakdowns, accompanied by the voices of angels singing, the definitive Experimental Christian-Hardcore record of the year is here. One of the main focuses for Akissforjersey is to be able to share their faith in Jesus Christ and his love and forgiveness. The band has certainly held strong to their faith thus far in their musical journey and it doesn't look like it's slowing down anytime soon.


Following up their previous independent release Keep Your Head Above the Water, Akissforjersey brings about Victims, an album that will not hold back. The definitive experimental Christian Rock record of the year is here.

Victims was released May 6, 2008 via Tragic Hero Records.

Keep Your Head Above The Water