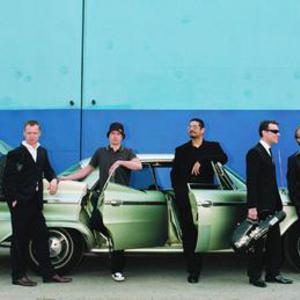 BigBand
After a couple of years, the New Cool Collective founded their Big Band extension. The band loved playing with the groovy 19-piece line up and once again the crowd went mad. So they initiated monthly New Cool events at an Amsterdam club, where the big band played with different guest musicians. At one of these events the Afro-drummer Tony Allen played with them. This party lasted for several nights and instigated the afrobeat club tour of the New Cool Collective Big Band featuring Tony Allen and the kora-player Ali Boulo Santo.

Trippin'
New Cool Collective is a working band. The eight prolific musicians also play individually in various other projects but decided to take a break and meet up in a farm house in the Dutch countryside to record this latest album. The eight musicians relaxed, hung out and caught up. This album, Trippin&rsquo;, is like their holiday report:
Perry came about spontaneously around seven in the morning. Some of our songs originate from a Jam other songs start from a riff or a rhythm that one of us begins to play like Bambol&eacute; or Ms.Wilson.
In the beginning Ms. Wilson was a just bass riff and a beat. We gave it its title on our trip to Uganda where we gave a workshop at a music school. Ms Wilson was the British music teacher who appeared to stem from the colonial times. She taught Beatles-songs to black Ugandan children and when we joined in she told us off: ?no drumming, please.? So the song is our rhythmic revenge on Ms Wilson.
Propeller surfaced as a sweet recollection of our Easy Tune & Soul Tune-days. Black Label we created because we needed a repertoire for the gigs with Tony Allen. Son of Chacha was one of our lazy afternoon discussions and Conga Yeye is the cuban carnaval rhythm we indulged in at the end of a day.
This is roughly how the New Cool Collective's bucolic break turned out - as they were chilling out on the fertile jazz ground, relaxing to afrobeat, enjoying the latin-caribbean soul food, and every now and then bursting out in an Easy Tune jam. Fully recovered, they knocked on the door of the independent label Dox Records and offered Trippin&rsquo; and five bonus tracks featuring Tony Allen. Dox Records reacted with pleasure: ?Perfect! A trip like this is wholesome to anybody.? With the new repertoire and on-stage enhancements (such as the 19-piece line up), the New Cool Collective has started up again. To begin with they released the 12'' version of Perry in February '05 by the British Freestyle label.