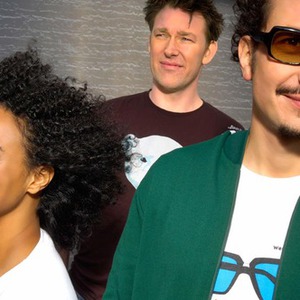 Zuco 103 is a Latin trio from The Netherlands formed in 1999, lead by Lilian Vieira that brilliantly mixes traditional Brazilian singing and European electronic music. The great majority of the lyrics are in Portuguese with the exception of a few written in English. It has been 13 years since Lilian Vieira, from Rio de Janeiro, moved to The Netherlands. It was there that Lilian, a former nursing student, started singing nights in Amsterdam and Zuco 103 was born.

It has been 13 years since Lilian Vieira, from Rio de Janeiro, moved to The Netherlands. It was there that Lilian, a former nursing student, started singing nights in Amsterdam and Zuco 103 was born.

The name of the band, Zuco 103, was suggested by the drummer Stefan, who, with his poor Portuguese, wanted to say "suco" which means "juice" but instead said "zuco". Lilian liked the mis-pronunciation so much that the name was approved. "The 103 is the alcohol tax" in Amsterdam, explained the singer.

After having given up to start nursing school again in the Netherlands, Lilian started singing in the night, and taking singing lessons in the Conservatory of Rotterdam, where she met Stefan Kruger, a drummer who had a passion for Brazilian music. ?We made a bossa nova and jazz quintet?, tells Lilian.

Later, when they were taking part in a project with Indian and African musicians, Lilian met Stefan Schmid. The three made a song together and, later, recorded a CD. They also had one song included in a compilation of Brazilian music released in New York - for the Ziriguiboom stamp, of B?co Dranoff, who discovered the band. After this, the first CD was released by the Belgian label Crammed (partner of the Ziriguiboom), and were indicated to the local prize Edson Awards.

"In the Netherlands, everything happens. The rock and electronics scenes are very strong. But they just love Latin rhythms", says Lilian.

Retouched! After The Carnaval Remixes

One Down, One Up CD2

One Down, One Up CD1

The Other Side Of Outro Lado