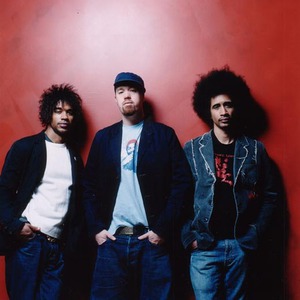 Soulive is a jazz organ trio that originated in Woodstock, New York. The band consists of Eric Krasno (guitar), Alan Evans (drums), and Neal Evans (Hammond B3 organ, basskeys, clavinet). The band is also usually accompanied by its horn section, which formerly consisted of Sam Kininger (saxophone), but now features Rashawn Ross (trumpet) and Ryan Zoidis (saxophone). Soulive has greatly expanded their sound since their inception in 1999.

Soulive has greatly expanded their sound since their inception in 1999. They have played with highly respected musicans such as John Scofield, Warren Haynes, Sam Kininger, Dave Matthews, Chaka Kahn, Robert Randolph, and Ivan Neville. Their 6 studio releases (Get Down!, Turn It Out, Doin' Something, Next, and Breakout) have been produced by respected labels Blue Note Records, Velour Recordings, and most recently the rising Concord Records. They have a self-titled live album that was released in 2003, and they permit audience taping and distribution of their shows (which can be found at bt.etree.org and archive.org).

Soulive has recently teamed up with singer "Toussaint" for their latest release "No Place Like Soul."

Bowlive: Live At The Brooklyn Bowl