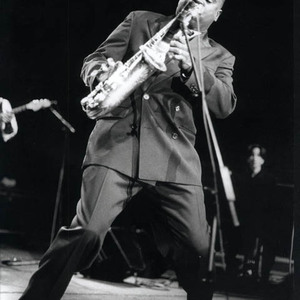 Maceo Parker (born February 14, 1943) is a noted African-American funk and soul jazz saxophone player, best known for his contributions to James Brown's distinct sound. He was born in Kinston, North Carolina in a musically-rich environment. His mother and father sang in a church and both his brothers are accomplished musicians (drums and trombones). He and his brother, Melvin Parker, joined James Brown in 1964; in his book Brown says that he originally wanted Melvin as his drummer but agreed to take Maceo under his wing as part of the deal.

He and his brother, Melvin Parker, joined James Brown in 1964; in his book Brown says that he originally wanted Melvin as his drummer but agreed to take Maceo under his wing as part of the deal. Maceo, Melvin and a few of Brown's band members left to found Maceo & All The Kings Men which toured for two years. In 1973 Maceo returned to James Brown's band. In 1975 Maceo and some of Brown's band members, including Fred Wesley, left to join George Clinton's Parliament.

Maceo once again joined James Brown from 1984 to 1988. In the 1990s he finally embraced a successful solo career. He has released seven solo records and plays 250 tour dates per year. It's also worth noting that his average play time on stage is more than two and a half hours.

In the late 1990s, Maceo began contributing semi-regularly to recordings by Prince and accompanying his band (The New Power Generation) on tour.

His current tour band includes bassist Rodney Skeet Curtis and several other talented musicians. They have been billed as "The greatest little funk orchestra on earth".

His latest album "Roots & Grooves" with the WDR Big Band is a tribute to Ray Charles whom Parker cites as one of his most important influences.

His gear consists of a Selmer Mark VI (alto) Saxophone together with a Selmer Brilhart 'Ebolin' #5 mouthpiece to create the funky sound he's famous for.

It's All About Love