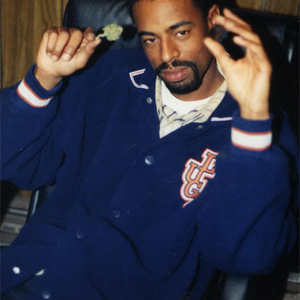 Andre Hicks (July 5, 1970 - November 1, 2004), better known by his stage name, Mac Dre, was a Bay Area based gangsta rapper from the Crest side of Vallejo, California and considered one of the predecessors of the hyphy movement. During his career in the rap world, he worked with artists like Andre Nickatina, Yukmouth, Snoop Dogg, Mac Mall, Dubee and Keak Da Sneak. Career Mac Dre's music gained popularity in the early to mid 1990s throughout the Bay Area, eventually receiving national recognition through his independent record labels Romp and Thizz Entertainment.

Mac Dre's music gained popularity in the early to mid 1990s throughout the Bay Area, eventually receiving national recognition through his independent record labels Romp and Thizz Entertainment. He released many hit singles, such as "Too Hard for the Radio", and most recently "Feelin' Myself". He was the creator of the "Thizzle Dance", a popular dance which holds no specific standard. Hardship and controversy were staples of Mac Dre's career. After recording his first three albums between 1989 and 1991, Mac was charged with conspiracy to commit bank robbery. His record label, Romp Productions, and his many references to "Romper Room" in his songs, coincided with a Vallejo robbery gang of the time calling themselves the "Romper Room Gang" and responsible for the robberies of many area banks and pizza parlours. Hicks was alleged to be a member of the gang. The rapper was sentenced to five years in prison in 1992.

In prison, Hicks gained some notoriety by recording the lyrics to songs directly over the Fresno County jail inmate telephone. His album, Young Black Brotha, was a result of such efforts, as well as guest appearances on fellow artists' songs, all while Hicks was still imprisoned. A later album, Back 'N Da Hood, was also made up of these prison-recorded songs.

After his release from prison in 1996, Mac Dre began releasing albums steadily, building pace in the early 21st century. Mac Dre's audience was growing, and mainstream hip-hop stations were beginning to give Hicks' music more airtime. Hicks relocated to Sacramento, California in 2001, where he began a label, Thizz Entertainment.

On November 1, 2004, Mac Dre was shot to death while returning to his hotel after a performance in Kansas city. A car pulled up next to the white van carrying Dre along with other Thizz artists. Whether words where exchanged or not, the ordeal ended in the bloodshed of a bay area rap legend. The van swerved off the road and into a ravine where it ran into a tree. Word is that Dre was thrown from the van, but officials say they found him in the front seat, dead on arrival. Some believe that Mac Dre's killer was Kansas City rapper Anthony "Fat Tone" Watkins. In 2005 Watkins was murdered, allegedly by Bay Area rapper Mac Minister. In March 2006, Mac Minister was arrested by FBI officials.