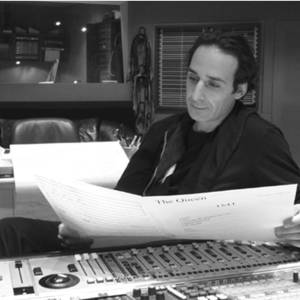 Alexandre Michel G?rard Desplat (born 23 August 1961 in Paris, France) is a French filmscore composer. Notably, he has received four Academy Award nominations, five BAFTA nominations, five Golden Globe nominations and six C?sar nominations, winning a Golden Globe for his work on "The Painted Veil" (2006) and a C?sar for both his works on "De Battre Mon C&oelig;ur S'est Arr&ecirc;t&eacute;" (2006) and "The Ghost Writer" (2011). In 2011, Desplat won his first British Academy Film Award for his score for "The King's Speech".

Desplat was born in Paris to a French father and a Greek mother. At the age of five, he began playing piano. He also became proficient on trumpet and flute. He studied with Claude Ballif and Iannis Xenakis in France and Jack Hayes in the U.S. Desplat's musical interests were wide, and he was also influenced by South American and African artists and teachers, among whom were Carlinhos Brown and Ray Lema.

Desplat has composed individual songs that have been sung in films by such artists as Akhenaton, Kate Beckinsale, Charlotte Gainsbourg, Val?rie Lemercier, Miosotis and Catherine Ringer. He has also written music for the theatre, including pieces performed at the Com?die Fran?aise. Desplat has conducted performances of his music played by the London Symphony Orchestra, the Royal Philharmonic Orchestra, and the Munich Symphony Orchestra. Desplat has also given Master Classes at La Sorbonne in Paris and the Royal College of Music in London.

In 2007, he composed the scores for Philip Pullman's "The Golden Compass", Zach Helm's directorial debut "Mr. Magorium's Wonder Emporium" with American composer Aaron Zigman and the Ang Lee movie "Lust, Caution". Prior to these break-out works, he contributed scores for "The Luzhin Defence", "Girl with a Pearl Earring", "Syriana", "Birth", "Hostage", "Firewall", "Casanova", "Nid de Gu&ecirc;pes" and "The Painted Veil", for which he won the Golden Globe Award for Best Original Score, Los Angeles Film Critics Association Award for Best Music, and the 2006 World Soundtrack Award. He won the 2007 BMI Film Music Award, 2007 World Soundtrack Award, 2007 European Film Award, and received his first Academy Award nomination for Best Original Score for "The Queen". He also won the Silver Berlin Bear at the Berlin Film Festival for Best Film Music in "De Battre Mon C&oelig;ur S'est Arr&ecirc;t&eacute;". In 2008 Desplat received his second Oscar nomination for David Fincher's "The Curious Case of Benjamin Button". Desplat received his third Oscar nomination and a BAFTA nomination for "Fantastic Mr. Fox" in 2010, both of which were won by Michael Giacchino for "Up".

In early 2011, Desplat began to write the music to "Harry Potter and the Deathly Hallows: Part 2". He reunited with director David Yates, who offered Desplat the opportunity to score the second part.
Desplat's upcoming projects include "The Tree Of Life", directed by Terrence Malick (which he actually recorded in early 2010), "A Better Life" and "La Fille de Puisatier".

The Midnight Sky (Music From The Netflix Film)

The Shape Of Water

The Light Between Oceans