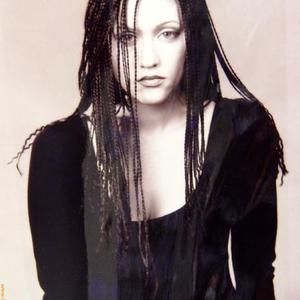 During this time, Linda went back into the studio with her producer, Max Fadeev. The product was Linda's high selling hit album "Vorona" (the Crow) which was released in 1996. Linda scored the top spots on the charts with her hit songs from Vorona, and became a very big name. 1996 came to an end, and Linda released a remake of the album Vorona. "Remake Remixed Vorona" featured a new version of Vorona, and the old favorites in a different order.

This gave Linda enough time to record her third studio album, which was called "Platsenta" (Placenta) in 1999. Times were changing... We were on the eve of a new millennium. But the year wasn't the only that was changing... Linda herself adopted a new look. Red hair. This album's first single "Vzglyad Iznutri" (Look from Within) was very industrial-rock sounding, and featured Linda as a mental patient in a hospital.

After Platsenta was released, Linda's first "Greatest Hits" album was released, which was called "Beloe Na Belom" (White on White.) This was the last album that Linda would work with Max Fadeev, and the last album that would feature a song written by Max Fadeev. The album is named after this landmark song, which would be the last before Linda took matters into her own hands, and started to write lyrics and music for herself.

"Embriyon" (Embryo) was released in 2000, which had two discs... "Right" & "Wrong." They featured different versions to some songs, and a new song called "Iznanka Sveta" (the Wrong Side of the Light.) This was the first song that Linda co-wrote the lyrics and music for, together with Evgeniy Pozdnyakov. A video was released for this song, which showed Linda in a little girls costume. Similar to a porcelain doll. Doors open up to flames, and mirror images of Linda appear out of each entrance.

Linda proved that she could in fact succeed in the music business without someone completely controlling her musical style, and lyrics by the song Iznanka Sveta, and came back with a new album called "Zrenie" (Sight) in 2001, on the very large record company "BMG Russia." This album was unlike anything that Linda had done before. It was a much more alternative album, which featured guitars, drums, and electronic pulses. The album cover featured just Linda's eyes, which were surrounded by gold leaf, to mimic the affect of a turtles shell. The album's debut video for "Shokolad I Sleza" (Chocolate & Tears) also featured the turtles which were on the album cover, and a very high-tech, high-budget video shoot. Fans didn't respond as well to Zrenie, as they had her last albums.

So in 2003, Linda signed a contract with an even bigger company... Universal Music Russia. The result of this agreement, would be a maxi-single, for a new song called "Tseri i Kolt'sa" (Chains & Rings.) The song also featured an English version of the song, which was called, of course: "Chains & Rings." It featured several remixes for both the Russian, and English tracks. The last song on the single was the song "White Birch." Another English song, which was the English counterpart for her epic song "Beryoza" off of Zrenie. The music was different, but the general feel was the same. This song was done by Linda, exclusively.

A long wait passed between the Maxi-Single's output, and the album. During this time, Linda performed at many festivals, and clubs. Promoting the new material. One by one, almost all of the new songs from the album (under the working name "Pulya" ) were performed, and heard. In October of 2004, Linda finally released the album. The name changed to "AtakA" (Attack) and had a very different style from her last studio album, Zrenie. It seemed like a natural follow up to her smash hit "Vorona." In the album's first 2 weeks, 100,000 copies were sold in Moscow, alone. Very good for an area where pirated CD sales are not prohibited by the law.

Autumn 2005. Linda in London promoting her album. There were some talking about working with Moby and Bj?rk, but unfortunately it still hasn't been confirmed.

In 2005, Linda released another greatest hits album. The album was called "Pochti Bliznetsy" (Almost Twins) because the album was released as a duel disc collection, which had album version songs, and remixed songs... Which were "Almost Twins" to each other. On disc one, a new song called "Tai!" (Melt!) was placed. On disc two, the song "Vstrecha" (Meeting) was placed. Linda was working on a new album, with the famed Greek Producer, Stefanos Korkolis. Korkolis was given the opportunity to pick an artist from Universal Music's catalog to work with. Strangely enough, he picked Linda. The collaboration couldn't have worked out better. The two hit it off, and showed a general interest in making an artistic, creative album. Linda has been quoted as saying that "Stefanos is the best producer she has ever worked with."

Linda's first song from her new album was released in March of 2006, and unveiled as "Ya Ukradu" (I Steal.) This song became the biggest radio single, since Linda released "Begi" (Run) from her 2004 AtakA album. During this time, Linda began to take part in the new international creative project "Nazorei." This project gathered creative people from around the world, in the fields of art direction, computer graphics, music producers (Korkolis) singers (Linda) and others. The first output for this project would be Linda's new album, which was given no working name. However, it wasn't long before the album name was given. "AleAda" was the name of the new album, which was a made up word by Linda. Ale, coming from Linda's mother ALExandra, and Stefanos' mother ADA. The album saw a new look for Linda... Natural blonde hair. Nothing shocking, just something very simple and beautiful. Linda's videos for "Ya Ukradu" & "Mechena Ya" (I'm Stigmatized) were both shot in Greece, as well as Tolkai Na Lyubov' (Pushed Into Love) which was shot in a studio.

Linda continues to perform the new songs off of AleAda at various clubs throughout Russia, and plans to record songs from AtakA, and AleAda in English. Most recently, she has asked the fans themselves which songs THEY want to hear in English. Linda is literally an artist of the people. She announced that the two songs from AleAda that are already being worked into English are "Lyubov' V Konverte" (Love Inside an Envelope) and "Belyi Shtorm" (White Storm.) In addition, the song "Agonia" (Agony) was recorded into the English version "Just Agony," and the song "Po Relsam Lyubiv' (On the Rails of Love) from "AleAda" is being recorded in Greek.