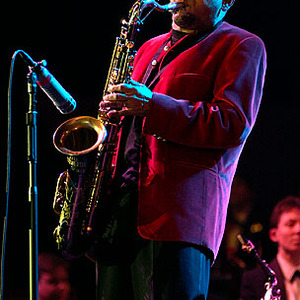 In 1983, Kirk Whalum caught the attention of the pianist Bob James. And, Whalum joined his album "12" (1985). He released his debut album "Floppy Disk" with James' support. From the latter term of 1980's, Whalum began to make a name for himself as a sideman of great insight and musicianship, playing on albums by a wide variety of artists -- including Larry Carlton, Quincy Jones, Luther Vandross, Al Jarreau and many others. He also toured with Whitney Houston. Her song I Will Always Love You's sax solo is Kirk's performance.

He signed Warner Bros. Records in 1996, and he and Bob James released co-work album "Joined At The Hip".
He united BWB with guitarist Norman Brown and trumpeter Rick Braun, and released "Groovin'" in 2002.
Now, he signs Dave Koz's label Rendezvous Entertainment(. He released Babyface's cover album "Kirk Whalum Performs The Babyface Songbook" in 2005.
Most notably he got together with Kirk Whalum Performs the Babyface Songbook and remade "The Secret Garden" into a 6 minute Sax Solo that is considered by many to be one of the finest pieces of sax playing around...

How Does Christmas Sound?

The Gospel According To Jazz: Chapter IV CD2

The Gospel According To Jazz: Chapter IV CD1

Eeverything Is Everything: The Music Of Donny Hathaway

The Gospel According To Jazz Chapter 3 CD2

The Gospel According To Jazz Chapter 3 CD1