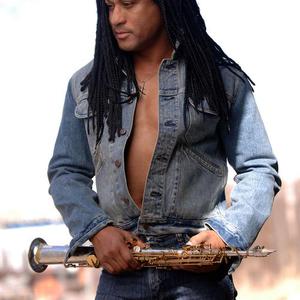 Marion Meadows Born in West Virginia, saxophonist Marion Meadows ? whose ethnic mix is Native American, African American and Caucasian ? he grew up in Stamford, Connecticut, where he began playing clarinet and studying classical music at eight years old. His passion for different types of music led him to appreciate numerous jazz musicians, including Stanley Turrentine, Sidney Bichet, Johnny Hodges, Duke Ellington and Coleman Hawkins, and he naturally gravitated to the soprano sax in his high school years.

Born in West Virginia, saxophonist Marion Meadows ? whose ethnic mix is Native American, African American and Caucasian ? he grew up in Stamford, Connecticut, where he began playing clarinet and studying classical music at eight years old. His passion for different types of music led him to appreciate numerous jazz musicians, including Stanley Turrentine, Sidney Bichet, Johnny Hodges, Duke Ellington and Coleman Hawkins, and he naturally gravitated to the soprano sax in his high school years. Fortunately for the smooth jazz fans who have embraced his sweet and funky soprano sound over the last decade, Meadows decided to take a few very important trips to Europe during his junior and senior years. He had dreamed of being either a veterinarian or zoologist, and assumed he would enroll in college as a pre-med major. Playing the sax was just a hobby until he saw the way audiences reacted to him and his student cohorts in Holland, Italy and Austria.

?The first trip was with my high school band and the second was a graduation gift to me and a few other guys playing over there in a big band setting,? he says. ?It was exciting seeing positive newspaper articles about my playing in Italy, receiving all sorts of accolades and feeling the excitement of interaction with the crowd. It was a tremendous rush, and lit the fire.?

After studying jazz with Anthony Truglia, Meadows attended Berklee College of Music, where he majored in arranging and composition. He later went to the SUNY Purchase School for the Arts, where he studied under Ron Herder. ?I got a lot of sideman jobs in college, and I have always said I got a graduate degree playing clubs,? adds Meadows, who perfected his craft studying with Joe Henderson, Dave Liebman and Eddie Daniels. ?Not long after I finished school, (well-known jazz drummer) Norman Connors recorded my song ?Invitation' and then asked me to join his band. I later produced his Passion album with him. Things just fell into place.?

Meadows first hit the airwaves in 1991 with For Lovers Only, but his career really began one day in the late ?80s at New York's Grand Central Station. He had been a sideman with Connors for three years with only vague notions of eventually going solo. Then one day, as the oft-told story goes, he was waiting for a train, pulled out his horn and began playing under the huge dome. His sweet sound caught the attention of fellow traveler, TV composer Jay Chattaway, who was so impressed that he hooked Meadows up with legendary keyboardist Bob James. James signed Meadows to a deal with his TappanZee label, and though Meadows' first recording went unreleased, the experience put him on the road to his eventual success.

Meadows hooked up with numerous artists and musicians and became a well known sideman in his own right, recording or performing over the years with Brook Benton, Eartha Kitt, Phyllis Hyman, Jean Carne, The Temptations, Michael Bolton, Angela Bofill, Will Downing and Native American flute player Douglas Spotted Eagle, among many others. In the late ?80s, Meadows stretched his usual pop/jazz boundaries as a member of a New York avant-garde band called the Aboriginal Music Society. He was performing in Japan when he got the call that RCA Records was interested in signing him to a solo deal, based on his first album which he had recorded and financed himself. Meadows became a staple of the smooth jazz format with his subsequent recordings, which include Keep It Right Here (1993), Forbidden Fruit (1994) and Body Rhythm (1996).

After moving from his home in Connecticut to Phoenix, Arizona, Meadows signed with Heads Up International and released Another Side of Midnight (1999). A contemporary tribute to city life, his label debut was considered by critics to be his strongest work to date. His subsequent heads Up discography has been equally successful on an artistic as well as commercial level: Next To You (2000), featured a mix of R&B-influenced jazz coupled with sensual Latin rhythms; In Deep (2002), a neo-soul blend of jazz, R&B and hip-hop, brimmed with sophisticated arrangements and impressive tenor/soprano playing; Players Club (2004) paid tribute to Meadows' fellow musicians with a seamless mix of contemporary jazz and soulful R&B. All four Heads Up recordings have been well received by his ever-growing, always loyal fans. Dressed To Chill, scheduled for release on May 23, 2006, is the latest chapter in Meadows' satisfying tradition of cool sophistication.

?I've been involved in a lot of projects, both my own and group efforts,? says Meadows, ?and my main objective is to keep growing as an artist and engage the fans who have invested so much emotion in my music and my career. Aside from that wonderful sense of live communication, the real magic for me happens in the studio when I put on those headphones and begin to play. That's where the ideas just start to flow. Everything else in my musical life comes out of that moment.?