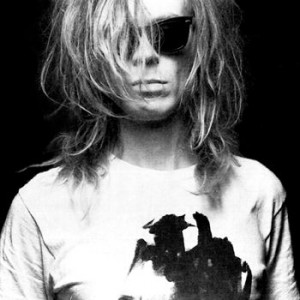 Julian Cope (born Julian David Cope, on 21 October 1957, in Deri, Mid Glamorgan) was raised in Tamworth, Staffordshire. He came to prominence as the singer of the liverpool pop band The Teardrop Explodes in 1978. Cope has since released many solo albums and is a founding member of the bands Queen Elizabeth and Brain Donor. In addition to his musical career, Cope has written several books of non-fiction and autobiography.

Cope grew up in Tamworth, Staffordshire in the English Midlands. He attended the City of Liverpool College of Higher Education . Cope's musical career began as bass player with a band known as Crucial Three, which also featured Ian McCulloch (future guitarist and singer for Echo And The Bunnymen) and Pete Wylie (later of Wah!). The band lasted for little more than six weeks and disbanded without any public performances or formal recordings, although the song "Books" was later recorded by both Cope's and McCulloch's subsequent bands. Cope went on to form other short-lived bands before first achieving fame and success as the singer, original bassist and primary songwriter of The Teardrop Explodes.

After The Teardrop Explodes disbanded in late 1982 following the completion of three albums, Cope returned to live close to his hometown of Tamworth, settling in the nearby village of Drayton Bassett, and soon began recording. In 1983 he recorded some tunes for John Peel's show. He re-worked these introspective works for his first solo album, World Shut Your Mouth, released in 1984. This was soon followed by Fried, which featured a sleeve with Cope clad only in a turtle shell. Cope's third solo album was the well-received Saint Julian and produced the single "World Shut Your Mouth", which became his biggest solo hit, reaching the UK Top 20 in 1986.

Cope was extremely displeased with his fourth solo album, My Nation Underground, which spawned a Top 40 single in "Charlotte Anne". He recorded his next album, the low-fi Skellington, in secret during the course of a single weekend, playing in the same studio used for My Nation Underground. His management had no desire to release Skellington, and Cope refused to record any other material while he feuded with them to try to get his new work released. This was to become the first of many feuds with his record companies. He also released by stealth an album in aid of Roky Erickson entitled Droolian, and his ongoing battle with those he referred to as "greedheads" eventually saw him turn his back on the music industry. In the course of one of his stand-offs, Cope began to write his first autobiographical book, Head-On which primarily covered the years 1976 to 1982, focusing on Cope's time before and during the life of The Teardrop Explodes and ending with the break-up of the band. This was followed a few years later by Repossessed, covering the years 1983 to 1989 and the recording of Cope's first series of solo albums, as well as the writing of Head-On. The books were republished in one volume in 2000, titled Head-On/Repossessed. Peggy Suicide and Jehovahkill, both recorded in the early 1990s, reflected his interest in the occult, animal rights, the goddess and ecology. In 1995, Cope released 20 Mothers spawning the single "Try, Try, Try". These three albums all achieved UK Top 20 status.

In addition to his two volumes of autobiography, Cope has written four other books of nonfiction. Krautrocksampler, released in 1996 and now out of print, covers the German krautrock musical movement. Reviews at the time were ecstatic, Rolling Stone citing it as "a work of real passion and scholarship". NME agreed: "This is a superb book ... this is an extraordinary book." Mojo went further, writing: "Brilliantly researched, Krautrocksampler abounds with revelations, and Cope's enthusiasm verges on the lethal ... a sort of lysergic Lester Bangs." In the Sunday Times, the reviewer wrote: "German 1970s minimalism is invading the British rock scene ... an Englishman is to blame ... Krautrocksampler is a lively history of a fascinating period, half encyclopedia, half psychedelic detective story." Before the publication of this book the genre itself had all but disappeared off the musical map; both the phrase and the genre are now firmly ingrained and have subsequently been heralded in the likes of Mojo and The Wire. The book was also the subject of fierce controversy due to Cope's outspoken remarks that Can's Bel-Air was a 'shambles'.

1998 saw the release of the widely-acclaimed bestseller The Modern Antiquarian, a large and comprehensive full-colour 448-page work detailing stone circles and other ancient monuments in the British Isles, which sold out of its first edition of 20,000 in its first month of publication and was accompanied by a BBC Two documentary. The Times called the book: "A ripping good read ... it is deeply impressive ... ancient history: the new rock 'n' roll." The Independent called it: "A unique blend of information, observation, personal experience and opinion which is as unlike the normal run of archaeology books as you can imagine." The renowned archaeologist Ronald Hutton went further, calling the book: "the best popular guide to Neolithic and Bronze Age monuments for half a century." The Modern Antiquarian was followed in 2004 with an even larger 484-page study of similar monuments across Europe entitled The Megalithic European, the most extensive study of European megalithic sites to date. In addition to his books on prehistoric monuments, Cope hosts a community-based Modern Antiquarian website that invites contributors to add their own knowledge of the ancient sites of the United Kingdom and Ireland. Cope has lectured nationally on the subject of prehistory, and also at the British Museum on the subjects of Avebury and Odin.

In October 2007, Japrocksampler was released, subtitled How the post war Japanese blew their minds on rock and roll. This much larger hard back book (304 pp) was written in a similar style to Krautrocksampler, but was a far more detailed study and took in the years 1951-78. It has been translated into Italian and Japanese.

Cope has opted out of the mainstream in recent years, releasing and promoting his music himself, rather than working with a major record label. He continues to record new material both under his own name and with regular collaborators under the band names Brain Donor - his proto-metal power trio, and Queen Elizabeth, an ambient two-piece. Most of his more recent releases are available either primarily or exclusively through Cope's extensive and interactive website, Head Heritage.

Cope has continued to perform live in the UK (including an appearance at the Glastonbury Festival in 2003) and other parts of Europe in recent years. He has not toured beyond Europe for several years. In 2005, he dropped attempts to plan a tour of the United States because a work visa could not be secured through the INS.

You Gotta Problem With Me CD2

You Gotta Problem With Me CD1