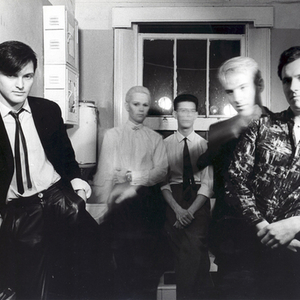 Modern English is a rock band best remembered for their song "I Melt With You" which was an MTV staple in 1982, and has appeared in various commercials and movies over the years. The group disbanded a while in 1991, but later recorded in 1995 with some new members. Formed in Colchester, Essex, England, in 1979 by Robbie Grey (vocals), Gary McDowell (guitar, vocals), and Michael Conroy (bass, vocals), Modern English was originally known as The Lepers.

Formed in Colchester, Essex, England, in 1979 by Robbie Grey (vocals), Gary McDowell (guitar, vocals), and Michael Conroy (bass, vocals), Modern English was originally known as The Lepers. The group expanded to "Modern English" when Richard Brown (drums) and Stephen Walker (keyboards) were subsequently added to the line-up of the indie rock band (later Ted Mason, Matthew Shippley). A debut single, "Drowning Man" was released in 1980 on the Limp Records label. The band's full-length debut Mesh & Lace, released by 4AD Records a year later, drew heavily on the gloom rock sound already patented by bands such as Bauhaus and Joy Division.

The follow-up album After The Snow (August 1982), recorded by the same line-up, introduced warmer sounds and strong guitar harmonies (most notably on the hit "I Melt With You"), in contrast to the tinny bleakness of the debut. It was well received in the USA, selling 500,000 units, and the band relocated to New York to consolidate a popularity encouraged by college radio. Their album Ricochet Days had a crisper production with hits such as "Ricochet Days" and "Hands Across the Sea". By the time of Stop Start, released in the US by Sire Records in 1986, Walker and Brown had left, and Aaron Davidson (keyboards, guitar) (later of March Violets) had joined. The band had tried too hard for commercial success, pushed by their label and subsequent producers. Grey returned to England to form a new outfit, but reconvened Modern English in 1990 with Davidson and Conroy. They released Pillow Lips on the TVT label, selling 300,000 units. Robbie Grey and band member Ted Mason co-wrote and produced a second release for TVT, recording with live strings and multiple harmonies. It received very little enthusiasm from TVT and has been seen as the least successful Modern English album. Locked into contractual obligations with TVT, Grey subsequently put the band on hold in 1991 to study and travel, and Mason handled the legal issues of getting out of the TVT deal.

In 1995, Modern English with Matthew Shipley (keyboards), Ted Mason (guitar, vocals, production) recorded Everything's Mad for the Imago label. Robbie Grey continues to tour extensively on the US club circuit with Matthew and new guitarist Steven Walker writing new songs and playing them to packed audiences across the US, and in 2001 signed a new recording contract with A.P.G. Music. The new lineup recorded a new album with legendary producer Hugh Jones who originally produced "I Melt With You." 2007 saw the repackaged?remastered re-release of Everything's Mad for the Mi5 Recordings label distributed by Caroline/EMI. A Modern English rarities album with unreleased material was expected in early 2008, but has yet to be released. Modern English has sold close to four million records worldwide and were present at the BMI awards the the Dorchester Hotel in London where Robbie Grey, Mick Conroy and guitarist Steven Walker were presented with a lifetime achivement award for 3 million radio plays of "I Melt With You."

Take Me To The Trees