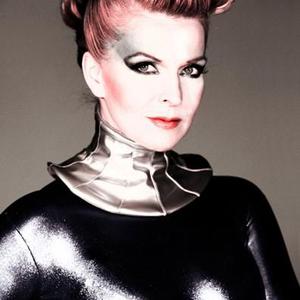 Toyah (born Toyah Ann Willcox on 18 May 1958 in King's Heath, Birmingham, England) is an English actress and singer. In a career spanning more than thirty years, Toyah has had 13 Top 40 singles, released 22 studio albums, written two books, appeared in over forty stage plays and ten feature films, and voiced and presented numerous television shows, including Brum, Watchdog and Songs of Praise. She attended Edgbaston C of E College where she gained a GCE pass in music and trained as an actress at the Old Rep Drama School in her home town of Birmingham.

She attended Edgbaston C of E College where she gained a GCE pass in music and trained as an actress at the Old Rep Drama School in her home town of Birmingham. Toyah's father ran successful joinery businesses.

She first became well-known during the punk rock era, her appearances in Derek Jarman's 1977 film Jubilee and 1979's Who album-inspired Quadrophenia launching her as a provocative and anti-establishment figure, an image she eventually abandoned.

Fronting a band known as Toyah, her singing career was slow to take off and the band released six singles in the UK before finally hitting the charts in 1981, with "It's A Mystery" and "I Want To Be Free". These singles were also successful on an international level. In 1982, she was voted Best Female Singer at the British Rock and Pop Awards ? since restyled as The BRIT Awards, or "BRITs" ? and in 1986 she married UK guitarist Robert Fripp. She was one of the first acts to score regularly in the UK Singles Chart with EPs. Also in 1986, Willcox sang lead on the Tony Banks track "Lion of Symmetry". In 1987 she made the top fifty with her version of "Echo Beach".

Since then, she has become a well-known (and more conventional) face on television and in the theatre. She has played straight roles, including in Quatermass (1979) and in Shakespeare plays, and appeared as a presenter of programmes such as Songs of Praise, Holiday (BBC), and Good Sex Guide Late. In 1999, she took the lead in the children's television series, Barmy Aunt Boomerang. She also provides the voiceover for the children's television programmes, the Teletubbies and Brum. More recently, she appeared in the reality television series I'm a Celebrity, Get Me Out of Here! and I'm Famous and Frightened!.

Following her 2000 autobiography Living Out Loud, Toyah had a further autobiographical book published in 2005 documenting her experience of cosmetic surgery, Diary of a Facelift.

She has appeared on radio including the 2002 BBC Radio 4 series The Further Adventures of Sherlock Holmes.

She continues to perform with her band, releasing a live DVD in 2005, and has a busy schedule with theatre commitments, including appearing on stage in London's West End performing the title role of Calamity Jane at the Shaftesbury Theatre in 2003.

She is currently appearing in the musical 'Vampire's Rock' in theatres across the UK.

In The Court Of The Crimson Queen (Remastered) CD2

In The Court Of The Crimson Queen (Remastered) CD1

In The Court Of The Crimson Queen