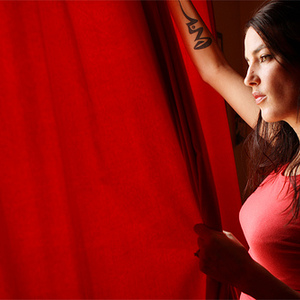 Kinnie Starr hails from Vancouver, British Columbia. She earned a degree in women's studies and fine arts at Queen's University in Kingston. She has since used this, along with her feminist viewpoint, as a background theme in her music. At a women's music festival, Kinnie took a few minutes to get the attention of everyone. She said, "I don't know if people are into it or not, but I notice women seem to say 'I'm sorry' a lot. So I was wondering if you'd all be into saying 'I'm not sorry' like, let's say it 10 times." The audience obliged her.

In 1996, she released her first album, Tidy. It was received very well for an indepenent artist, and received critical acclaim from some reviewers for women's magazines, such as Inga Muscio for Wig Magazine. "Kinnie is going to be a huge star. Because she is so emotionally real, vulnerable, articulate, talented, and loving--things many people fear greatly in themselves, and thus, look for in others--people are going to glorify her in an insanely unrealistic way. "

She was soon after courted by Mercury Records, and signed a deal. She proceeded to tour for two years promoting Tidy, mainly in Canada, but also in the United States and Europe, with her band, handsome boyz 3. Her shows definitely got peoples' attention. She is very spontaneous, often chatting and joking with the crowd, and encouraging them to participate. Her early shows became known after she had audience members jumping up on stage and talking about their sex lives for a free t-shirt.

She also prefers to walk around the audience when possible, instead of being on stage, having been described as a caged animal when stuck up there. "I will devise a way of playing guitar in the crowd," she once said.

During her touring, she worked in five shows for the 1997 Lilith Fair. The next year, her touring took the form of the Scrappy Bitch Tour, done with Veda Hill and Oh Susanna.

Finally, she started to work on her second album. She finished the album during a time of internal shake-ups and changes in her label. Mercury records became Island/Def Jam Records, but there was still no sign of them publishing her album. In the meantime, she opened two Canadian shows for Alanis Morissette.

In 2000, she grew tired of the situation, and asked them to let her go. They did just that, but refused her the rights to her new album, Mending, instead keeping it for themseves. She proceeded to head back to Violet Inch, and recorded a third album, Tune-Up, which released in 2000, and a fourth, Sun Again, released in 2003.

Her sound has been described as a merging of rock, hip-hop, r&b, pop, and alternative. Kinnie has given it the name "Chunkhop". The songs are full of spoken word and rhyme, with with some strong bass tracks, more so in Tune-Up than in Tidy.

She's not all that excited about being a "personality", due to people knowing her music. "The state of music is very odd to me right now because it's all about the cult of personality. I try to be casual, but that becomes a look. No matter what choice you make, it's seen as cultivated."