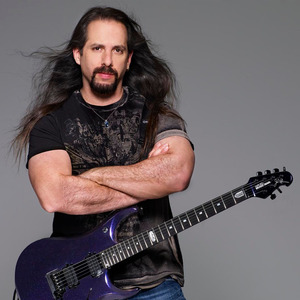 John Petrucci (born July 12, 1967) is the guitarist and a founding member of the progressive metal group Dream Theater. He is a popular musician in the progressive metal genre and utilizes a mixture of styles when playing, such as shredding and flamenco. John first played guitar at age 8 when he noticed his sister (who was taking organ lessons at the time) was allowed to stay up past her bed time to practice. He soon dropped it when his plan failed.

John first played guitar at age 8 when he noticed his sister (who was taking organ lessons at the time) was allowed to stay up past her bed time to practice. He soon dropped it when his plan failed. At age 12, he began playing again when he was invited into the band of his friend Kevin Moore, who would later become the keyboardist of Dream Theater. John began to practice in earnest whilst also working out so that his body could absorb the ultimate brunt of true shred. He was a largely self-taught guitarist who developed his skills through attempts to equal the chops of his idols, who included Steve Morse, Steve Howe, Steve Vai, Al Di Meola, Alex Lifeson, and Allan Holdsworth. He has jokingly referred to his guitar idols as "the Steves and the Als".

In 2001 he was chosen by Joe Satriani and Steve Vai to tour with them on the popular G3 guitar tour, which exposed him to a massive number of new fans and inspired him to record a solo album. Suspended Animation was released on March 1, 2005, and made available for order from his web site. He also appeared on the 2005, 2006 and 2007 G3 tours.

Petrucci also wrote and recorded two instrumental soundtrack songs for a Sega Saturn game titled Digital Pinball: Necronomicon. Each track is roughly two minutes long and they are simply titled "Prologue" and "Epilogue". Petrucci is an avid Sega Saturn gamer, and has revealed in interviews that he never tours without one.

In 2007, John Petrucci went on G3 tour again, this time with Joe Satriani and Paul Gilbert.

Dream Theater bandmate Jordan Rudess revealed in an interview that Petrucci is a practicing Catholic. Petrucci is married to Rena Sands, a guitarist in the all-female heavy metal band Meanstreak, and they have 3 children, SamiJo and Reny (who are twins), and Kiara.